This, and additional pages, will detail the modifications that I will make to the Buick body.  Recall that the word Kustomizing comes out of the ’50 and ’60 “Kustom Car” hobby.

The first major modification was what is called “chopping the top”.  In 1992 I made an AutoCAD drawing to help me understand what was involved.  In order to do that, I had to digitize a basic drawing of the body (using a full side view photo) and then modify it for the proper scale: 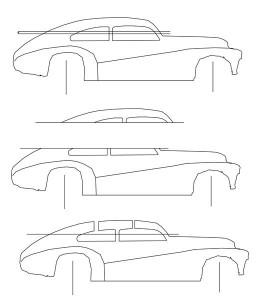 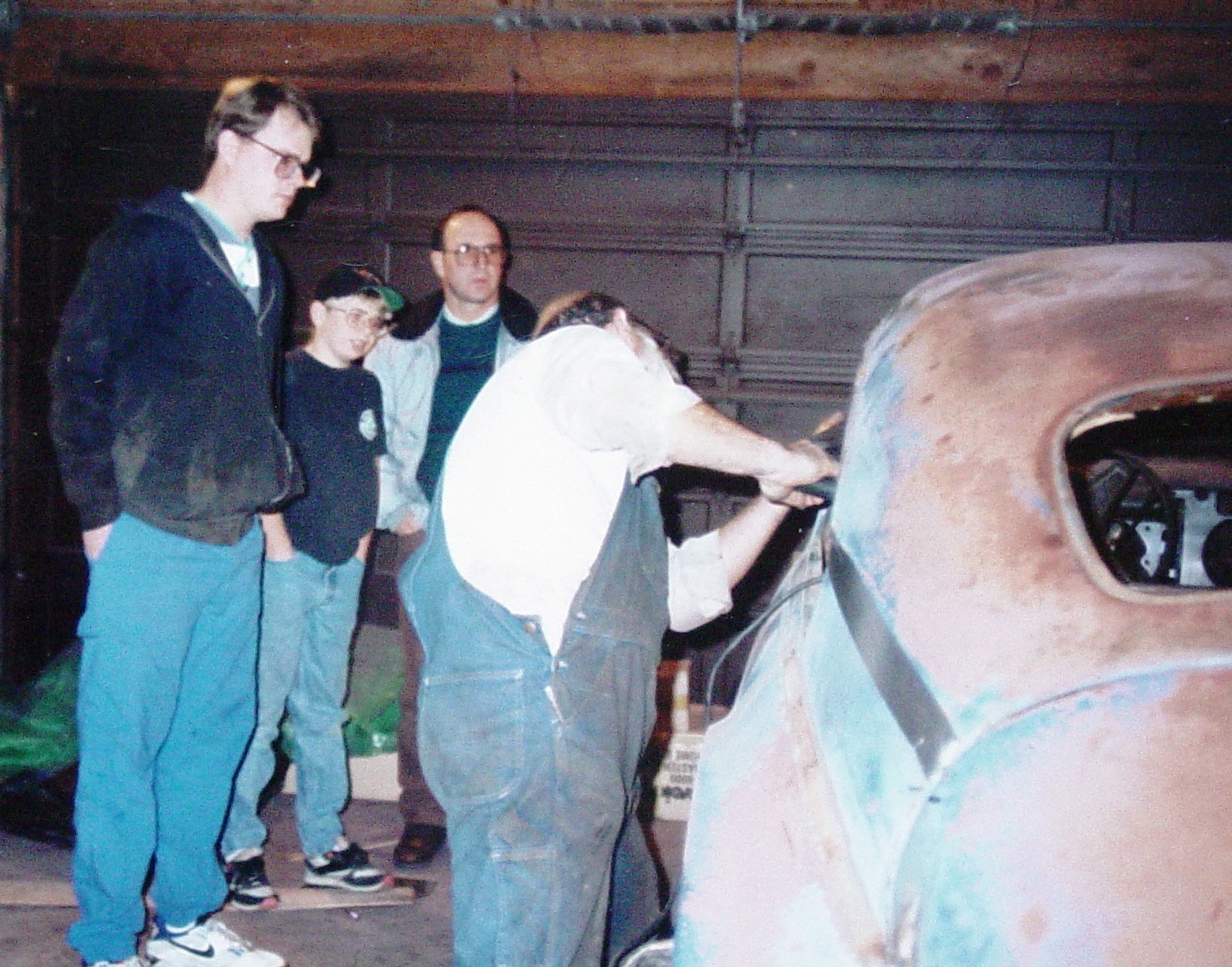 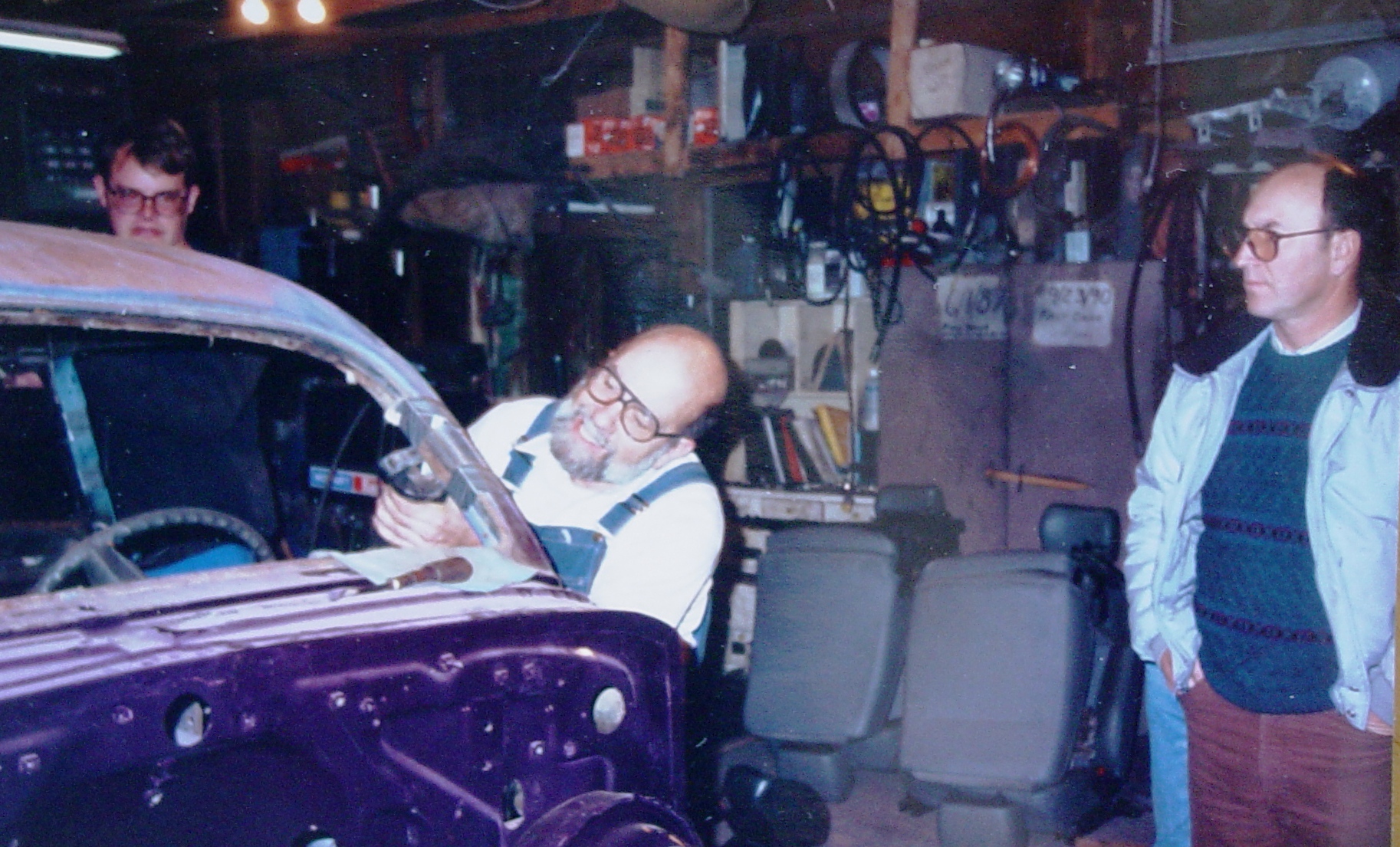 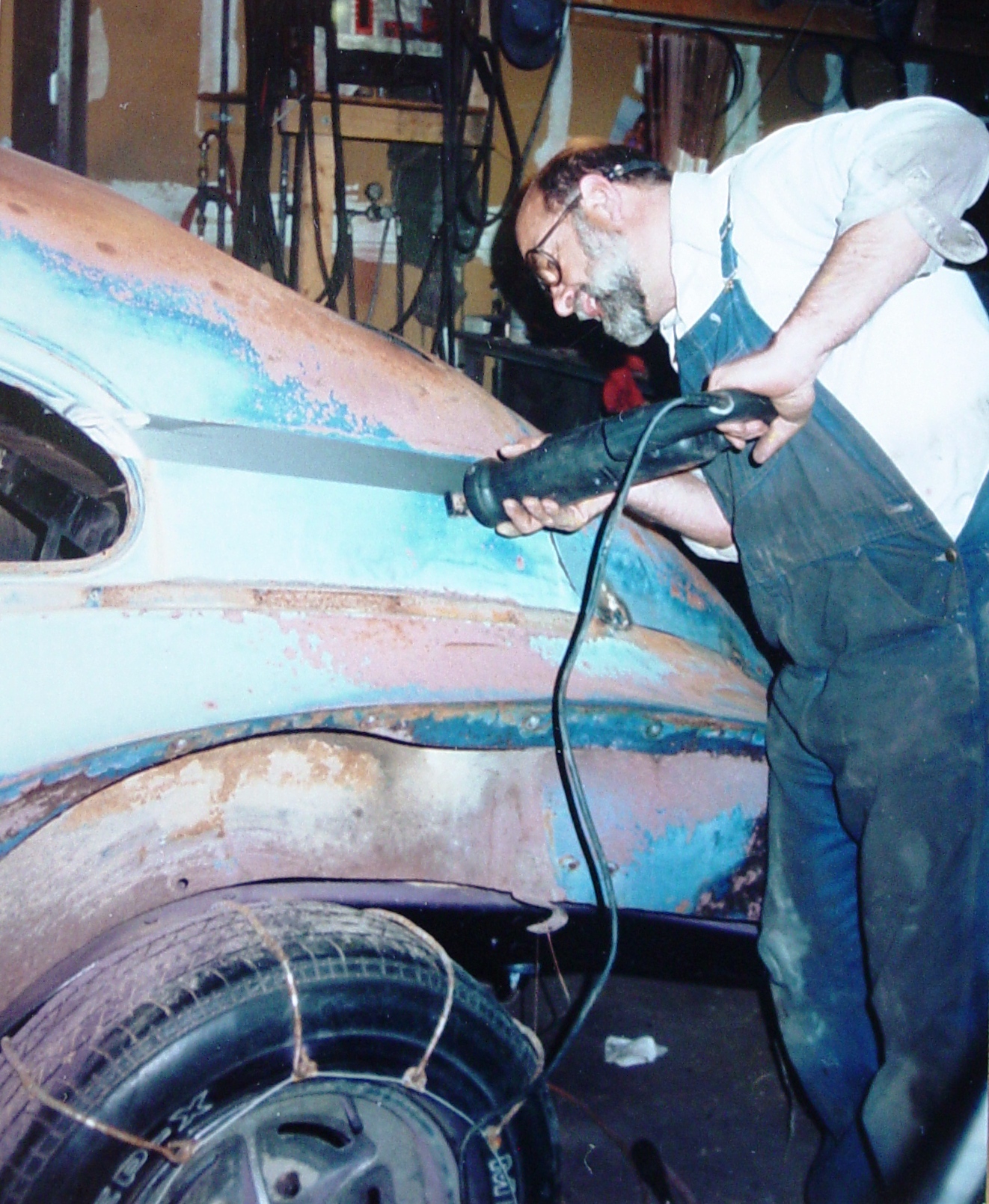 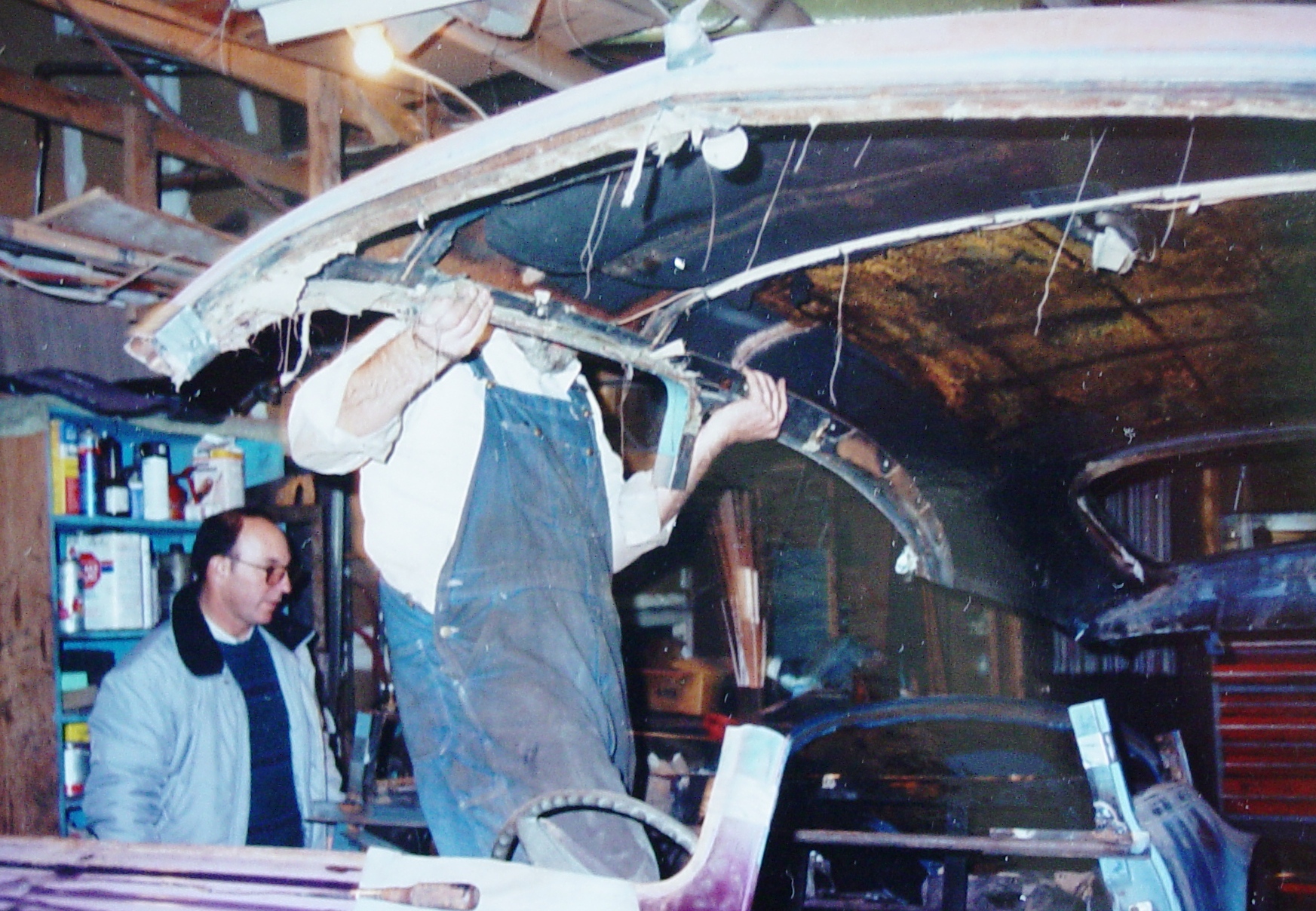 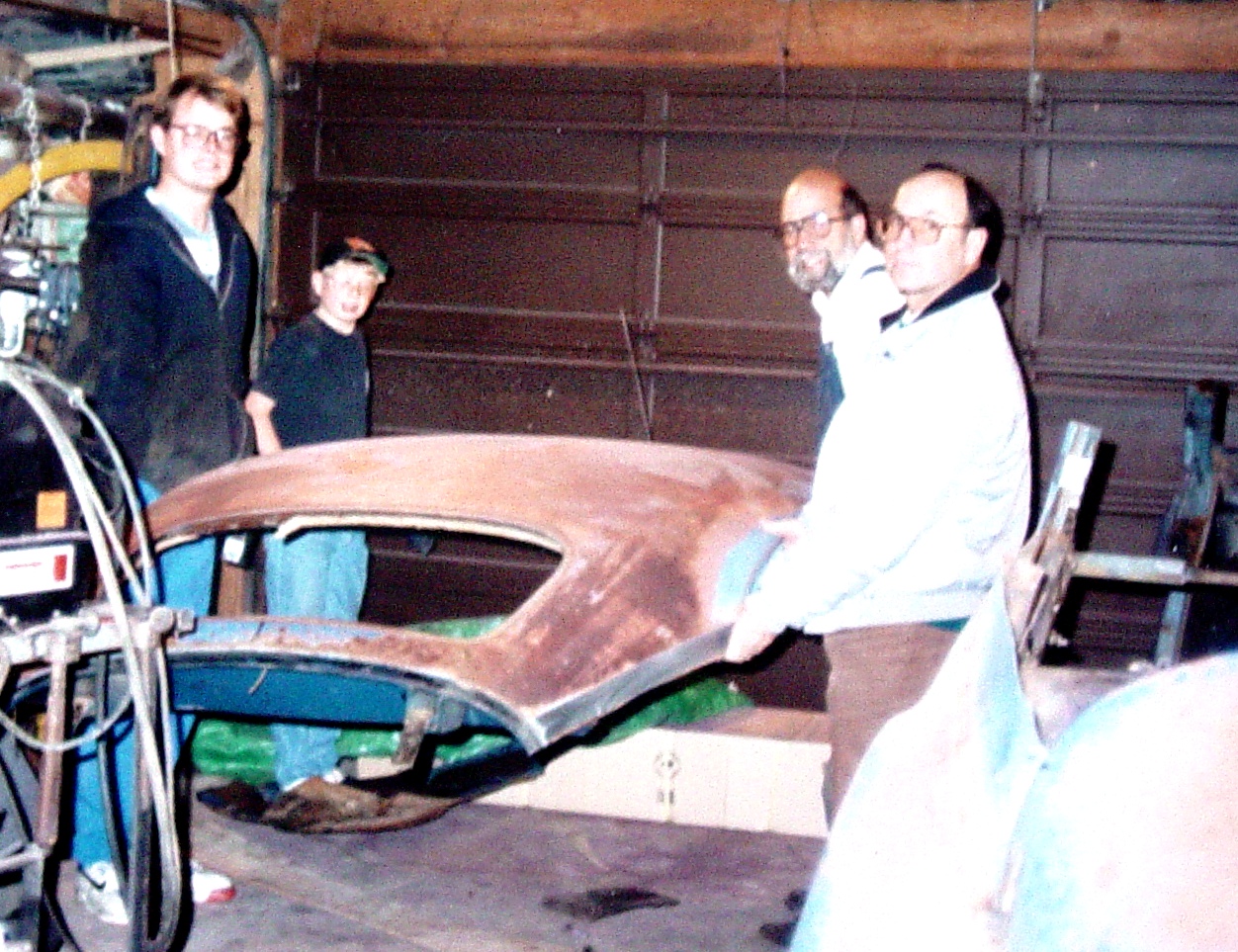 The photos below show some of the misalignment after 2 inches of material has been removed from the top: 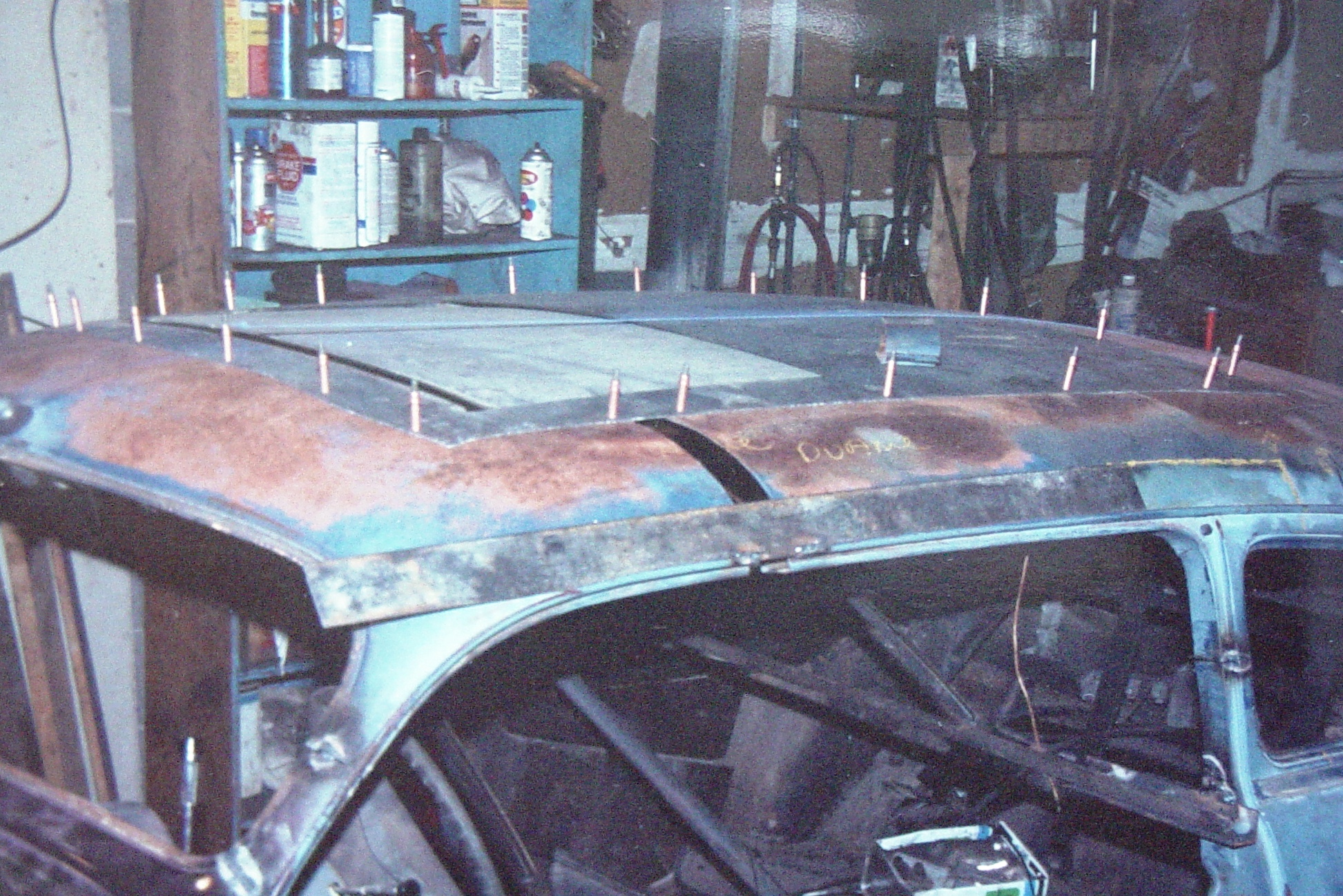 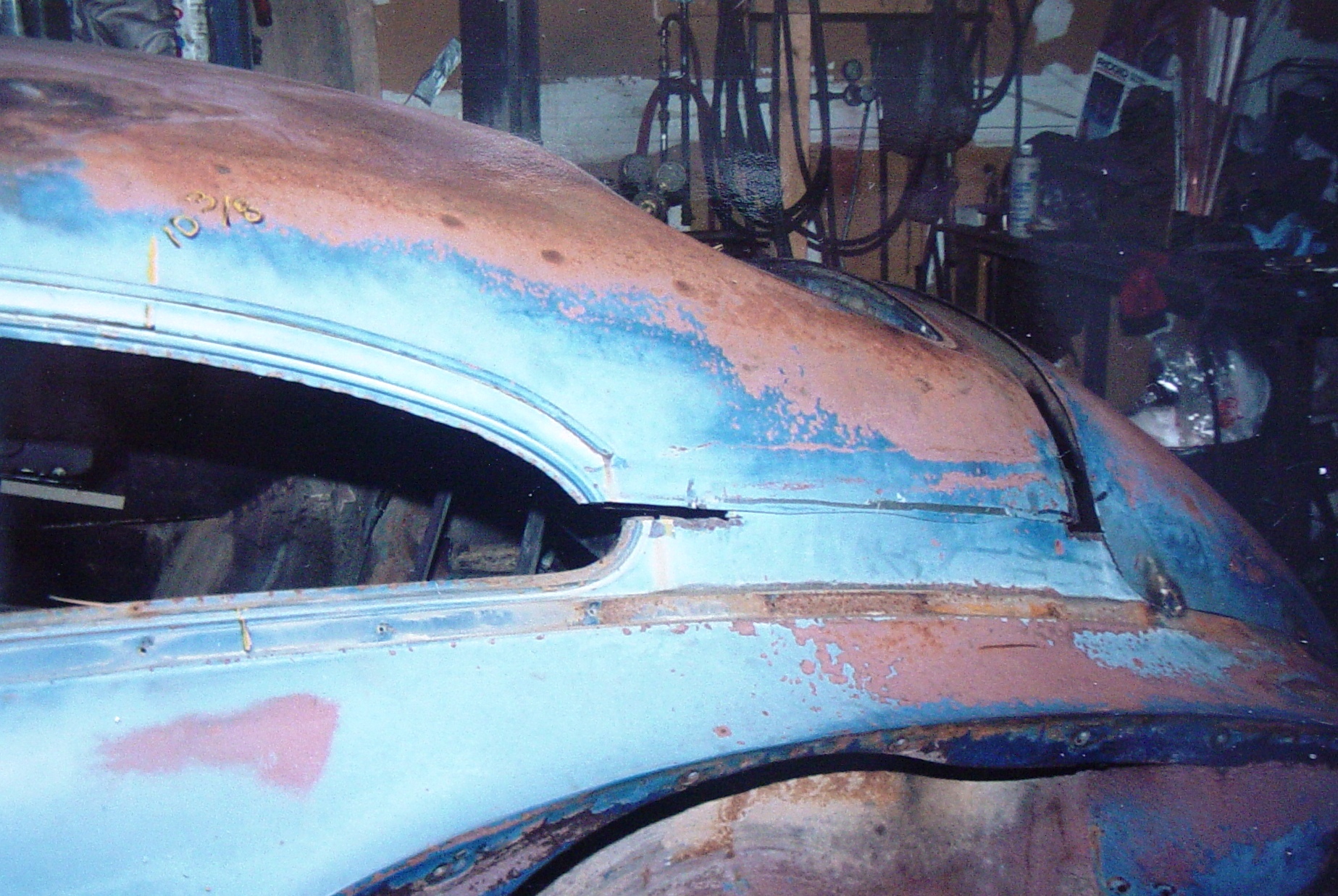 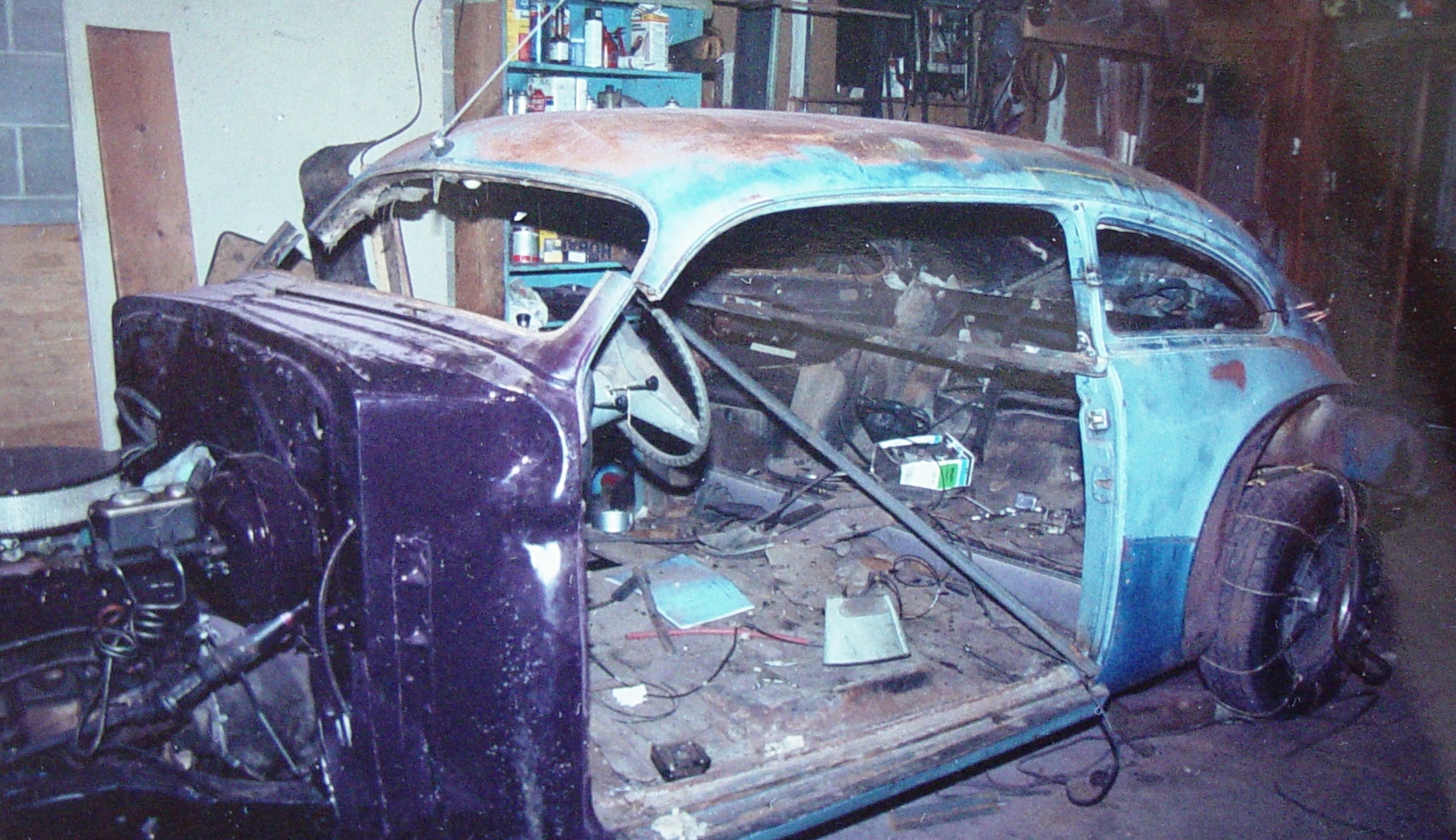 The next major modification was to “pancake” the hood: 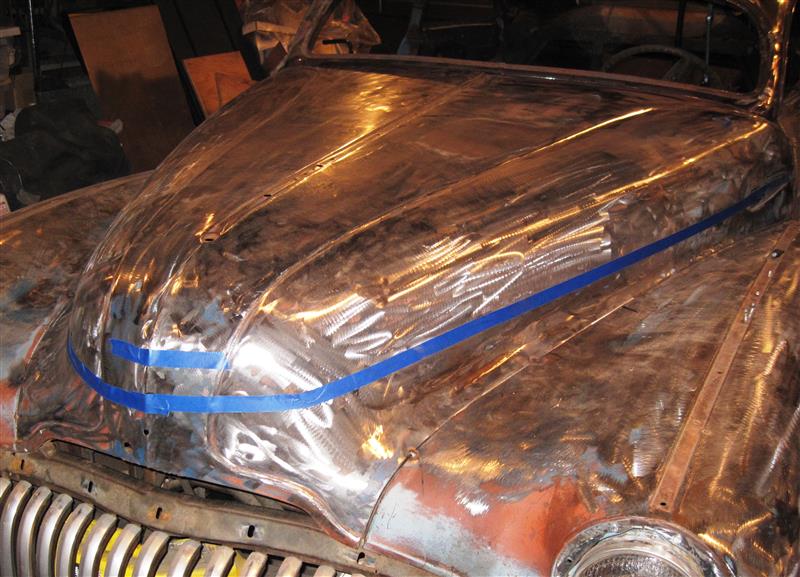 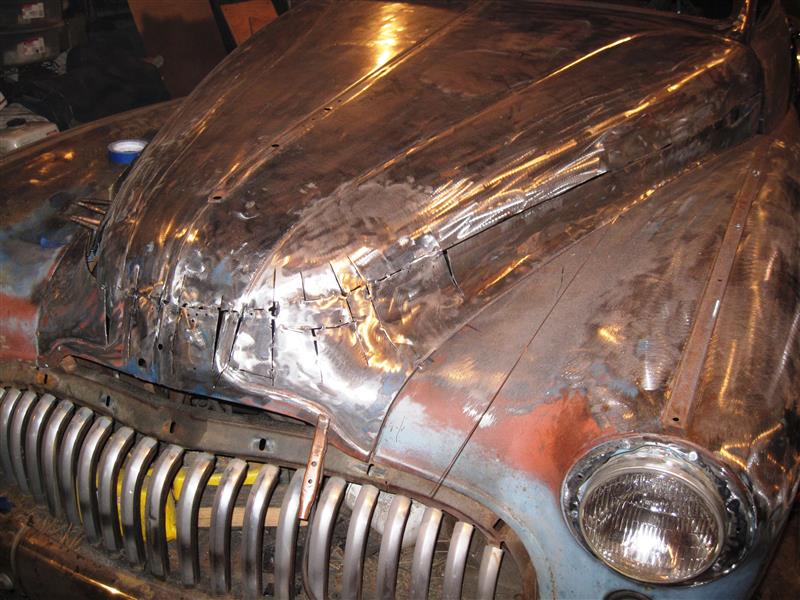 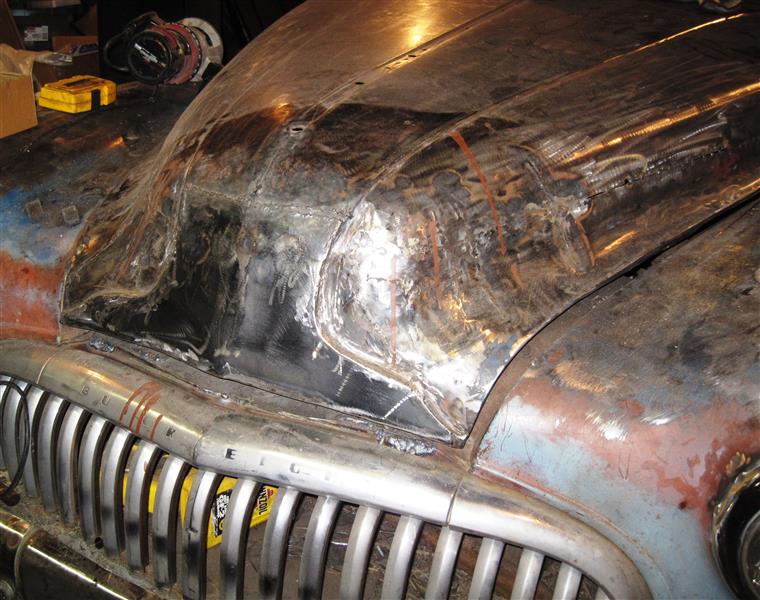 This involves making a pie shaped cut in the hood.  In my case, I cut 2 1/2 inches out of the front.  The process involves many slice type cuts that allow the top and bottom fit and “flow” together.  A couple of the areas in the lower front part of the hood did not turn out the way that I had hoped.  I cut some of the metal out and formed a new piece to insert (photo on right).  I am really pleased with the pancaked hood shape.  The original hood had a very “bulbous” look to it and the new shape is much more streamlined. 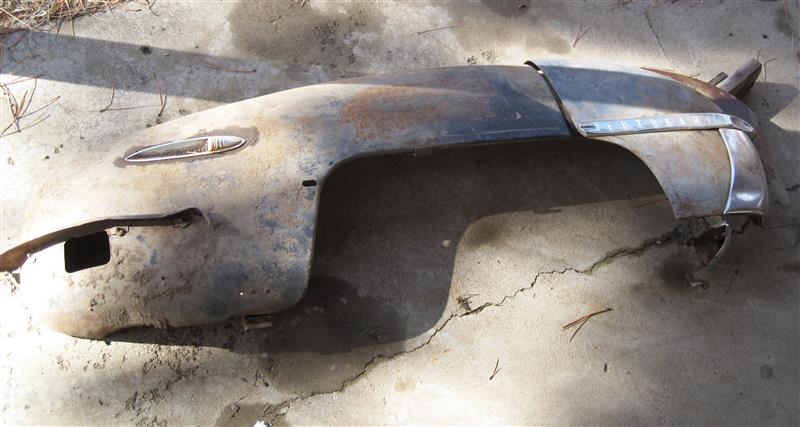 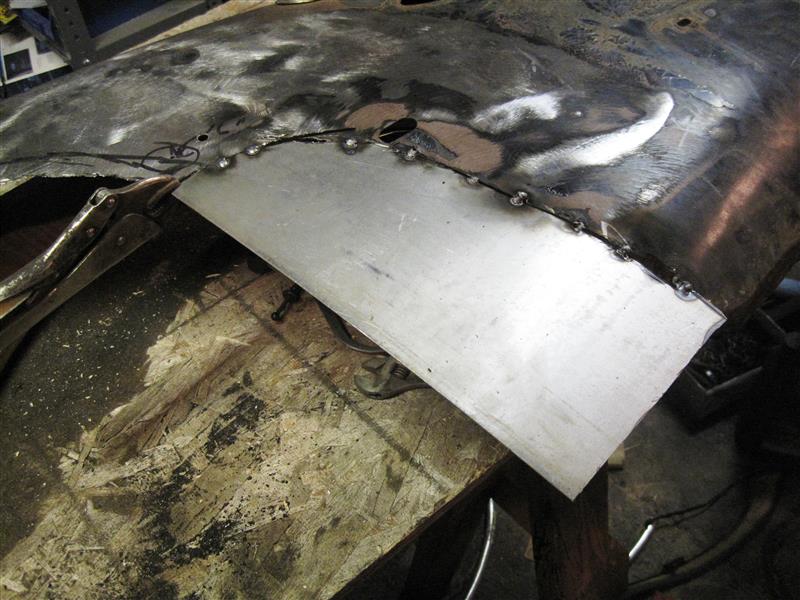 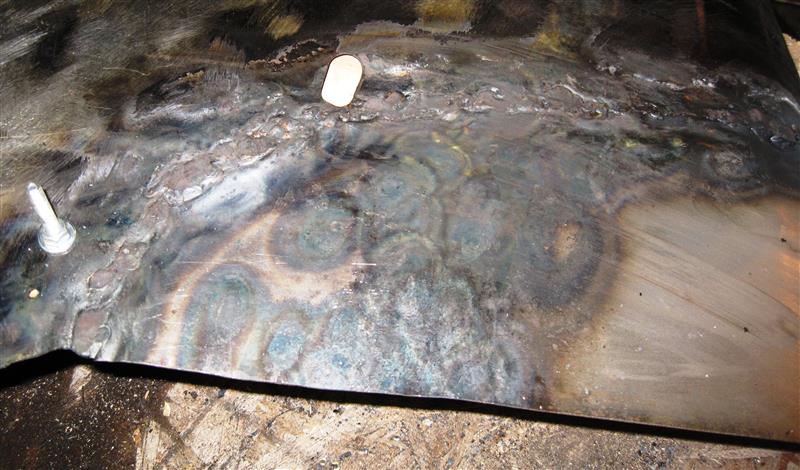 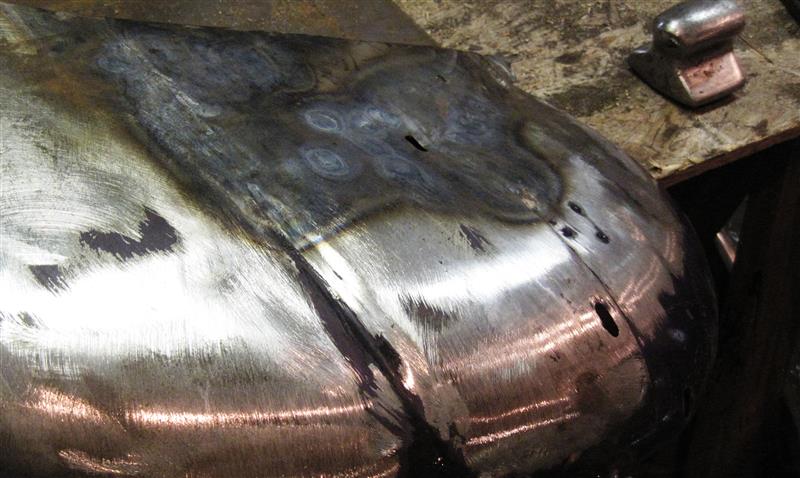 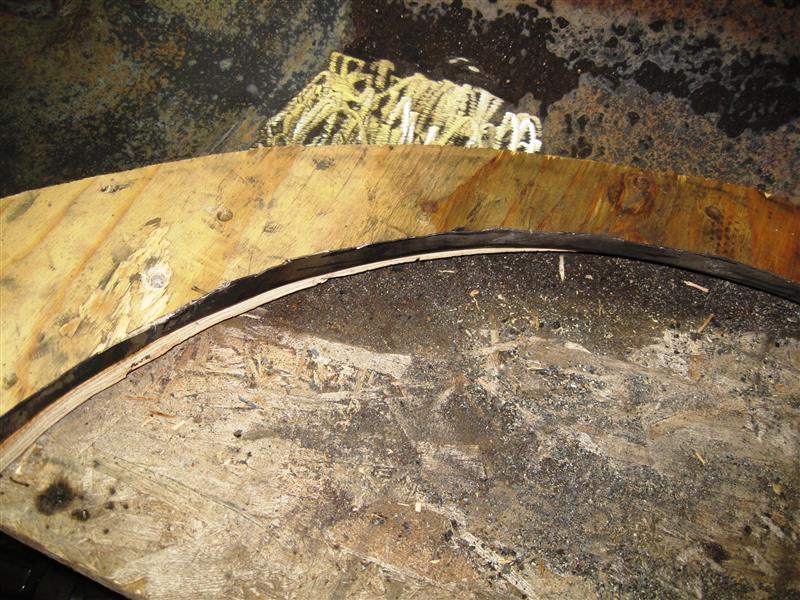 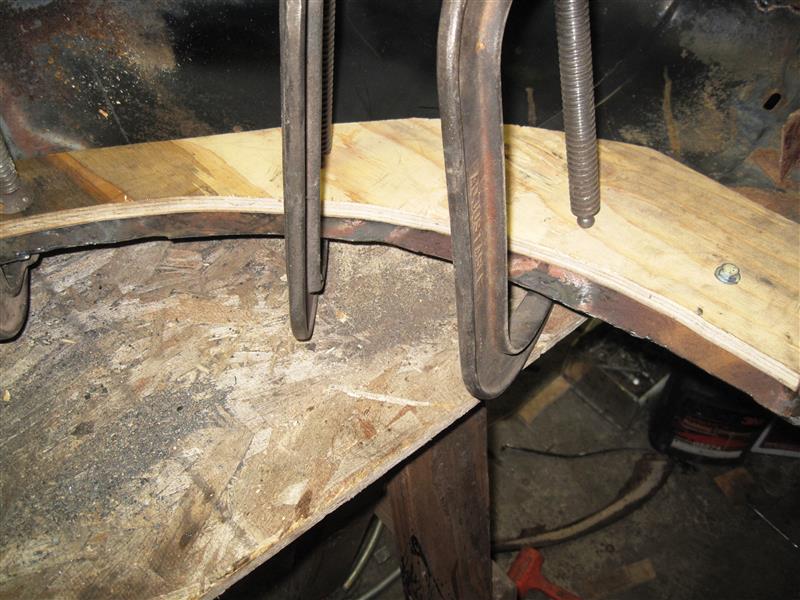 Next project was to start on the rear fenders. The photo gallery above shows some of the work on the driver side rear fender.  When I found the Buick in the wrecking yard, it was missing the rear fenders and part of the “fade away” door/quarter panels.  I did some measuring and parts off of a 47 four door could be made to work — albeit with a splice or two.  The top row of picture show the splicing of the two parts of the rear fender, adding a patch for the wheel will and hammer welding the patch seam.  The bottom right photo shows the shrinking needed to remove a styling “buldge” on the front of the fender.  My first approach to foruming the round wheel well was to weld tubing to form the bead.  For various reasons I discarded that thought and went with a hand-formed bead.   To accomplish that, I made a top and bottom “buck” and hammered the start of the bead. 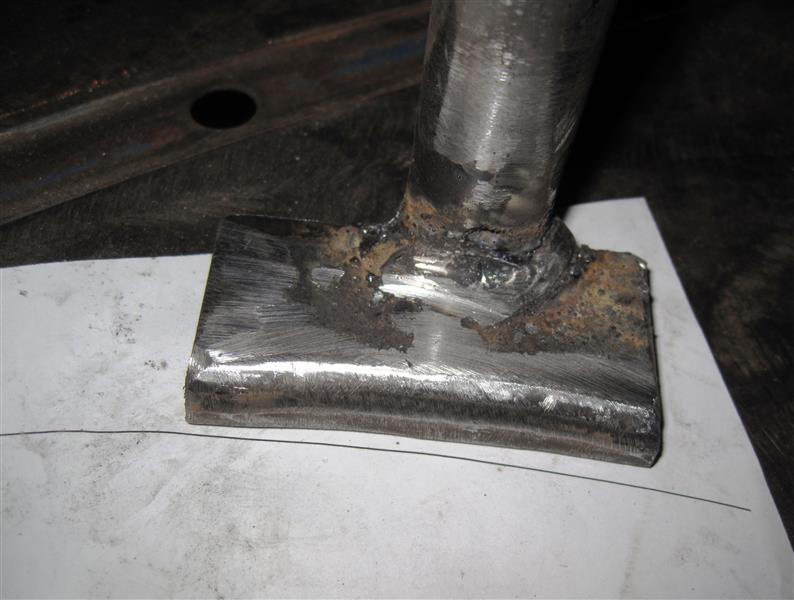 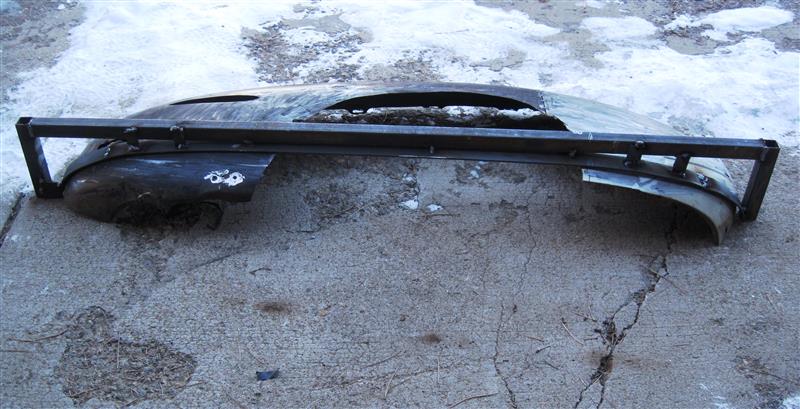 After the fender bead was bent to 90 degrees with the bucks, I hammer rolled the bead around two different formed dollys.  The photo on the left (above) shows a dolly I made from some scrap mental.  I drew a 30 inch diameter arc in my AutoCad program and printed out a full size arc which I used to form the curvature in the dolly.

The last two picture in the aboue gallery, show a “lesson learned”.  In all the hammer welding, patching and shrinking, I began to realize that the metal in the fender was really moving around and it was getting very distorted.  My solution was to fabricate a “bridge” structure that conformed to the correct shape of the fender (using the passenger side as a template).  The two pictures of the “bridge” show the correct fender shape and how badly the modified fender had warped. I am now in the process of “forcing” the driver side fender to conform to the bridge.  I will have to replace some of the sheet metal that I really messed up and the heating and welding process with the fender in the “bridge” should let the fender get back to the correct shape.

I can’t believe that it has been so long since I last updated this project page.  I have been picking away at this project whenever I get a chance (my other car projects seem to always jump to the top of the priority list).  This page needs a good updating, but I wanted to give you a quick teaser as to the current status.   To do that, I will  include two photos. 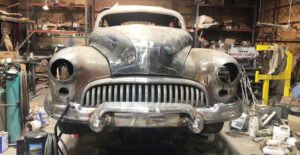 The above photo shows the front end with the bumper modified to include a rare 1953 Kaiser bumper guard.  Still lots of work to smooth it all out, but you get the idea.  It also shows the frenched headlights and parking lights that have been shaped with lead.  Lead work is very old school.  Indeed, the lead I am using was purchased from Bill Hines (king of the lead “slingers”) many years ago.  BTW, my shop is typically a mess, but when this photo was taken it looks worse, since I am in the process of “cleaning” the shop. 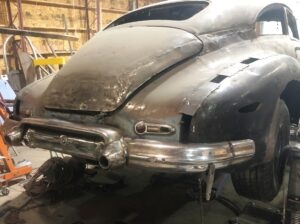 The above photo shows the rear bumper that has been modified by adding the Kaiser bumper guards (modified so that the exhaust exits through the bumper guard — a typical kustom modificaiton from the ’50s).  The bumper has also been shortened on the sides.   You will note that I am widening the fenders about 2 inches to allow for bigger tires.