I am in Oakley, KS on my way back from the Leadsleds.  I am staying at the Annie Oakley Motel (Google Map)

In this post I wanted to document a few things relating to this trip.

I broke up the travel to and from Salina by stopping about halfway in between.  I did this for two reasons.  First of all, I was not able to get on the road until early afternoon each travel day and secondly, I just did not feel up to a straight through, nearly 500 mile, drive.

On the way out to Salina, I stopped in Goodland Kansas and stayed at the Motel 6.  As I mentioned in the other post, the cost was less than half of staying at a Holiday Inn.  Of course, the rooms are very primitive but a bed is a bed.

Goodland is an interesting small town.  I drove around and sadly, like many small towns, there were lots of closed businesses.  One interesting location in the downtown area was what looked like a car lot out of the 50s (see photo).  There were several very old cars (mostly out of the 30s through 50s.  All were in less than stellar condition but many could be brought back to life.  There were several 49-51 Mercuries.  This is a sought-after car in the custom car hobby. 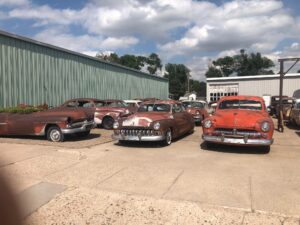 My choice on this motel in Oakley is a bit convoluted.

First of all, somehow I lost a day in my thinking about the show.  I have to coordinate my travel with Pat’s travel and that reduced my time at the show a bit.  As it turns out that was not a significant problem.  I did wander around the park where the show was on Thursday, but there were not many vehicles.  I spent most of the day Friday at the show and there were a huge number of cars.  I made several laps around the show until my knees and feet let me know it was time to leave. I spent Saturday morning at the show and there we even more vehicles.  Indeed, it became almost overwhelming.  While my time was a bit less than I had originally planned (erroneously), I was ready to leave around noon and start my trip back home.

The second reason for choosing this motel is even more convoluted.  As I planned the trip home I knew that I would need to stop a bit less than half way because of my late departure from the show.  Oakley Kansas seemed like a good stop.  As I looked for motels it became apparent that somehow this town relates to both Annie Oakley and Buffalo Bill (local bar uses that name).  Annie Oakley was born in a very small town close to where my dad was born (Greenville, Ohio).  We have spent some time in Greenville and visited the site where she is buried (Brock Cemetery).  So it seemed fitting to stay in a motel that identified with her.

Oakley is a very small town.  Main Street is about 3 blocks long and with many empty store fronts.  The motel looks like a motel out of the 50s (see picture).  When I first walked into the room, it seemed like a Motel 6 room.  However, it became obvious that it was well equipped and comfortable.

In a few minutes I will start driving towards Denver and meet Pat at the Kassel’s when they arrive from the airport.

That is all for this travelogue.