We are camped at the Grape Creek RV Park (Google Map).

We made the short trip from Howard to Westcliffe on Thursday (6/9).  This area is known as the Wet Mountain Valley.  The floor to the valley is very green and picturesque.  Out campsite looks off to the west and includes the beautiful valley and the amazing Sangre de Cristo mountain range.

Friday, we made a relatively short tour of the area including the town of Rosita.  Rosita was a mining town founded around 1874.  It became the county seat for Custer County.  There was not much left of the original town.  It is mostly newer homes.  We were able to view several of the mine tailings dumps as we headed north out of town on county road 329.  The mining was mostly copper and silver.

As the population of Rosita declined (mining petered out). Silver Cliff became the county seat and later Westcliffe became (and remains) the county seat.

Our campground is in a large aspen grove which is quite pretty.  Unfortunately, the sites are close together and the aspen do not furnish much shade.  We parked the trailer so that the slides would not hit the aspens, but the awning could not be extended – hit the tree.  This is a pretty area to visit, but we don’t think we will return in the near future.

I have added two photos.  One shows the view of the valley and mountains and the second shows our trailer in the campground. 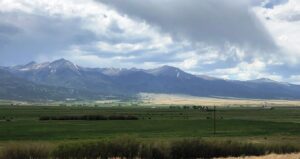 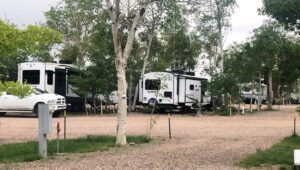 That is all for this travelogue