After I wrote what I thought was the last post for this travelogue, there were some changes.  The weather prediction for the Denver/Evergreen area for Tuesday (5/24) included snow.  We decided to stay one more day.

We had been observing what appeared to be a railroad roundhouse out our west facing window.  I did a little research and found that it is in the process of being restored (link).  It was built in 1909 and restoration began in 2003.  We decided to drive the truck and trailer over to the site as we departed on Wednesday.

We wandered around the roundhouse site (which is fenced off) and took some pictures.  As we were leaving, a man in a truck hailed us down and asked if we wanted to go inside the structure.  Obviously, we were thrilled to be able to get a closer look.  As you will see from the three pictures, the exterior is fully restored.  The interior is bare and will be the next effort of the restoration project.

That is all for the travelogue/epilogue. 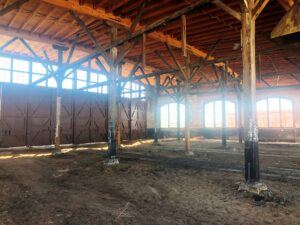