I have tried to think of an adjective to describe this resort, but it is hard to find one – perhaps mind-boggling is close to a proper description.  I have attached a photo from our veranda that does some justice to this “wonderland”. 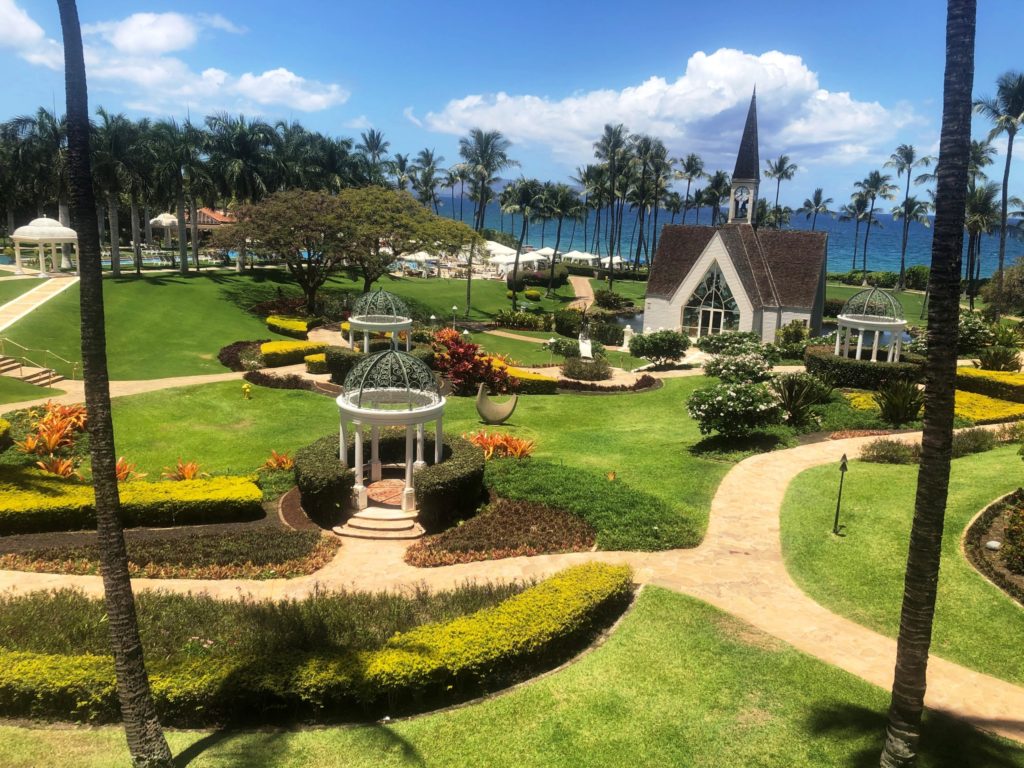 As you can see from the photo, our room overlooks the immaculately groomed grounds with the Pacific Ocean in the background.  We have spent quite a bit of time sitting on the veranda watching folks meander all over the grounds.  We have even seen some wedding parties.  We overlook the chapel and assume it is used for destination weddings.

Now to the story about the bus.  When we got back from our Seattle trip, a fellow contacted me (a follow-up call) saying that they were coming from Indiana with the intent of buying the bus.  That gave us two days to clean out 15 years worth of accumulation and make some repairs to the water system (never a problem until this year).  Daughter Lisa and Dan came up to bail us out on the second day of cleaning.  Without their help, we would never have gotten the job done.

Just as we were finishing up, the buyers pulled into the driveway.  Actually, I had a lot of maintenance check items that were not done.  The buyer suggested that we do them together so that he could learn a bit about some of the systems.  We did quite a bit of crawling around under the bus, but it was great experience for him.

They spent two nights in the bus and on Sunday (May 2, 2021) we completed the paperwork and they headed out to Indiana.  They had pulled a U-Haul trailer behind their Subaru and then loaded the car on the trailer for the return trip.  Here is a picture of them pulling out of the driveway. 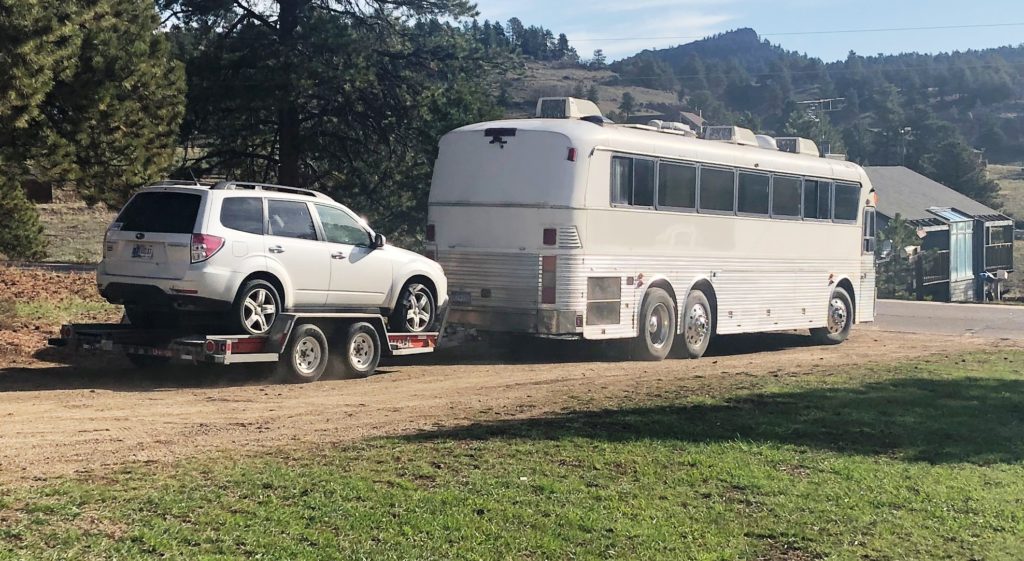 I had been a bit choosy about perspective buyers.  I wanted to make sure they fully understood (or were capable of understanding) the condition of the bus and all of the systems involved.  Further, I wanted the buyer to have good mechanical and electrical skills.  I could not have asked for a better buyer.  In addition, he had been wanting an Eagle bus for many years.

When the bus pulled out of the driveway, we had some very mixed emotions.  But it was time to move on.  The bus was sitting a lot and the maintenance had become increasingly difficult for me to get “in the mood” to do.

They made it back to Indiana with only a tire pressure issue on the way.

When we put the bus up for sale I began looking for a 2003-2007  Dodge 2500 quad cab with a Cummins diesel engine and six speed manual transmission.  Lots of reasons for the rather restrictive search but I will not bore you with the details.  I did a nation-wide search and the pickings were pretty slim.  I could find several with a ton of miles but nothing jumped out at me.  Just after the bus left, I did another search and found just what I was looking for in Boulder, CO.  SIL Dan (owns a very similar truck) and I went up to look at it on Tuesday  (5/4/2021).  It was at a Toyota dealer and when we returned from our test drive the sales person said that he was getting calls from all over the USA.  I was not surprised, since it was in great shape and had less than 100K miles (that drive train is good for well over 300k if properly maintained).  I immediately signed the paperwork.  I felt terrible that Pat did not see the truck before I bought it, but I knew that she would understand.  I picked up the on Friday (after they did their safety inspection).

So the next part of the puzzle was a camping trailer.  I told Pat that she had complete decision making responsibility for choosing the trailer.  Our granddaughter, Molly, immediately became involved as our “consultant”.  Each day she would search Craigslist and update an on-line spreadsheet for Pat’s review.  In many cases she prepared a good/bad list for the trailer components.  We took her to look at three trailers (actually one day we looked at several on one lot).  On Thursday (5/6/2021) we looked at a Passport trailer and Pat (and Molly) fell in love with it.  We picked it up on Saturday (5/8/2021).  I have included a picture of the combination. 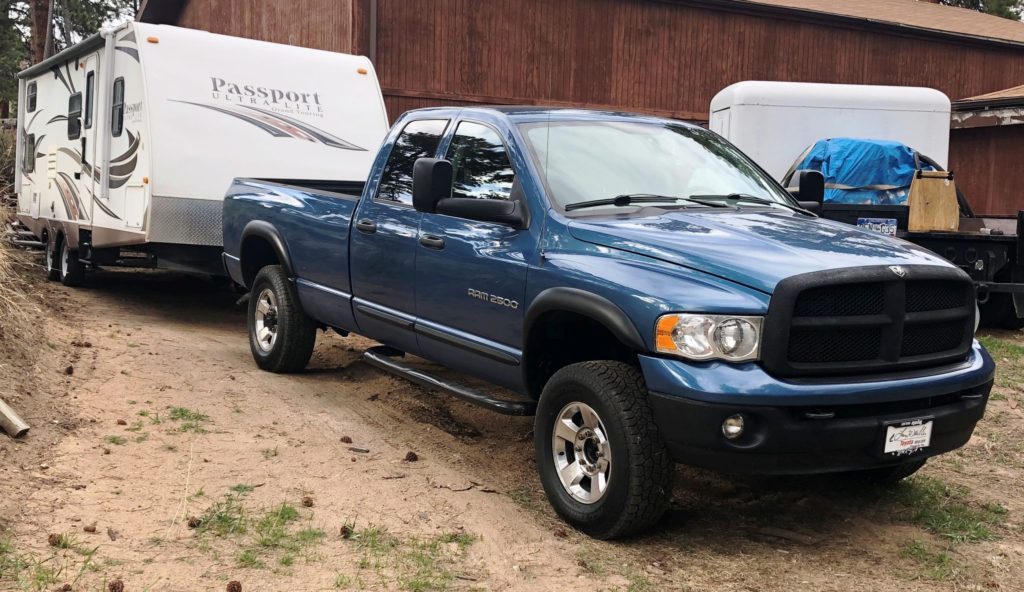 So, if you followed all the minutiae, we sold our bus and bought a truck and camp trailer all in one week.  That is a lot for these old folks {grin}.  Now the fun begins.  We need to load the trailer and I need to get acquainted with the systems and do some maintenance items.

I will get back to the travelogue in the next post.

This entry was posted in Uncategorized and tagged New truck and trailer, Selling the bus. Bookmark the permalink.