Wow, so much catching up to do.  After we left Las Vegas we made a fairly short trip to St George, Ut.  We chose the Holiday Inn Express there, since it was close to the Zion park entrance and also because we could watch the season final NHRA drag races (none of the four professional class champions had clinched the title – so it was exciting for us).

Monday we drove into Zion National park.  We had previously tried to reserve our favorite cabin (529) but it was not available.  We considered staying in the lodge, but we could not justify the expenses.  The drive into the lodge was breathtaking as usual.  I have posted a picture, but it simply don’t convey the grandeur of the canyon.  The trip out of the park heading east is equally amazing.  There is a huge tunnel carved in the side of the mountain.  The tunnel has several openings with quick views of the rock formations across the canyon. 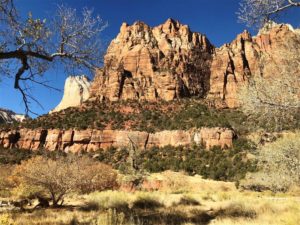 We then traveled to Kanab, UT which is where Stampin’ Up! manufactures most of their products.  We had toured the factory on our last trip through that area so we did not stop this time.  From there we drove to Page, AZ for the night.  I wanted to stop there so that Pat could experience the area that I had explored a bit when I had an NTT assignment there in 2015.  The primary attraction in Page is the Glen Canyon Dam (which creates Lake Powell).  We were able to observe the dam, Lake Powell, and the beautiful Glen Canyon below the dam.  Unfortunately, we were too late to take the tour of the dam.  I did that last time and it was a fantastic tour. 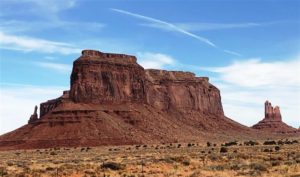 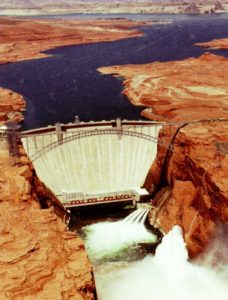 Glen Canyon Dam was started in 1956 and is 710 feet tall.  It has a total of 8 huge generators each of which has a capacity of 165,000 kW.  Sadly the frequent drought in the areas that feed the lake have resulted in a water level that is 88 feet below the capacity level.  This is about 53% capacity of the lake.  That said, it still controls the release of water so that down stream users have sufficient water for most demands.  Interestingly, the lower water level affect the ability to generate power.

Yesterday we drove east towards Kayenta, AZ and then turned north into Monument Valley.  As was the case with Zion, I have included a photo that inadequately shows the beauty of the area.  We then continued on to Cortez, CO where we spent the night.

While the weather has been fantastic the whole trip, that has now changed.  There are winter storm warnings out for large parts of southern Colorado.  The prediction was that we would have quite a bit of snow as we traveled over Wolf Creek Pass.  Turns out the conditions were not too bad.  We positioned ourselves here in Alamosa so that we would have choices for our route home.   One choice is US 285 that runs by our house.  The other is to travel east to I 25 and then head north.  As I write this, the 285 option (much shorter) does not look good.