Well, we survived a very interesting train trip from San Francisco (actually Oakland) to Seattle.  Our train departed essentially on time (9:40 PM).  This is a popular Amtrak train (“Coast Starlight”).  We booked a sleeping room.  Once we got to the room we were a bit surprised at how small it was.  There were two small bunks and barely enough room to change your clothes.  That said, once we got settled in, it was not too bad.  Of course, I had to get up in the middle of the night and risk my life getting out of the bunk {grin} and then traipse down the hall to the bathroom.  While we did not get as much sleep as we would normally get, it was not bad.

We had heard that there was going to be work on the track and we would encounter a delay.  The train stopped in Klamath Falls, OR and we parked on the tracks for around two hours – maybe more.  We could disembark the train and walk around that part of the town.  I was able to get a photo of our train (see below). 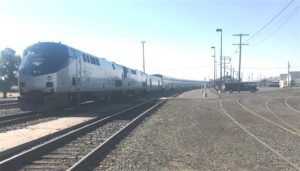 Because of the track delay, coupled with what seemed to like several slow areas, the result was us getting into Seattle at 11:23 (about 3 ½ hours late).  That was not a problem, but we were ready to get off the train.

The sleeping car accommodations included meals in the diner.  That was a lot of fun.  There was a SU demonstrator that we met in SF and we had lunch and dinner with them.  The meals were pretty darn good and served in a formal (think linen) setting.

We got to our Airbnb about midnight.  We had told the owner we would be late and the door has a code, so we got in with no problem.  The place is a converted garage, but well done.  It is very small, but all we need is a bed and bathroom.  As you can see in the photo it has a nice “patio” and I have spent some time there working/playing on the computer.  Here is the Google  Map link for the Airbnb (link) 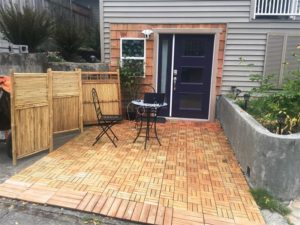 We are about a half mile from several restaurants.  We had brunch at the Varsity café and it was great.  We had large omelets that we could split and have tomorrow before we leave for the ship.

For dinner, we considered taking Uber down to the dock area for seafood, but instead decided on ordering Pizza delivered.  That was a good choice.  The pizza was good and they had cans of IPA beer that could be delivered.   Below you will see a picture of me having my fancy birthday dinner {big grin}. 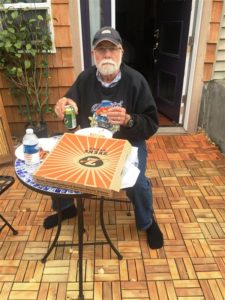 As was the case in SF, the weather is nice and cool here.  I have had my sweatshirt on all day and it is very comfortable on the patio.

This entry was posted in Uncategorized and tagged Airbnb, Seattle, Train to Seattle. Bookmark the permalink.