Well, I can’t figure out if I am ahead or behind on this post.  The title would suggest that we are in Nimes already, but we won’t be there for about two hours.  We are on a high speed train from Barcelona to Nimes.  We have reservations for two nights in an Airbnb there.  Once we get to the apartment I will upload this post.

I thought this might be a good time to catch up on a bunch of miscellaneous subjects.

As I have mentioned, the ship’s internet was slow at best (a bit faster than dialup) and virtually non-existent many times.  At certain times of the day it really slowed to a crawl.  On Monday it was non-functional and we got a small rebate.  I was very glad that we got the unlimited plan.  The other plans are based on time and when the internet is so slow that really chews up the minutes for little production.  During the faster times, we were able to explore and secure our Airbnb in Nimes.  We tried to plan further, but the system just frustrated us.

Not only does Stampin’ Up! pay for all the expenses of the cruise (including airfare), it also gives the cruise achievers great daily gifts in the hospitality suite and a great “pillow gift” each night.  One night the gift was a hat for me!  One of Pat’s gifts was a Dooney and Bourke purse!!  In total we would guess that the gifts had a value of close to $450 (see attached photo). 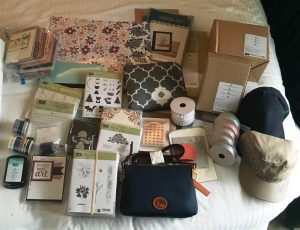 In addition, SU took Pat and I to a dinner in one of the fancy restaurants so that we could meet with one of the board members.  This was an invitation dinner for a limited number of folks and we were fortunate enough to be chosen.  The board member who took us to dinner was Paula Critchlow and her husband Jay.  She has a great personality and we really enjoyed the evening.

SU also paid for two shows.  The first was a dinner show called “Cirque Dreams”.  This was a show in the round.  The acrobatics and skills of the performers were astounding.  We had been warned ahead of time that they pick members of the audience as a part of the show.  We went early and got a seat in the upper area where we had great views and did not have to worry about being chosen.  The second show was “Burn the Floor”.  It was a great music and dancing show.

On our own, we went to a free show called “Priscilla”.  Well, two out of three is not too bad {grin}.  This was a show that was about three drag queen “men” traveling in a bus in Australia.  It was very blatant and “in your face”.  The description in the ship paper did not mention the nature of the show.  Several folks left fairly early.  We would have, but we were trapped in middle of the row.

To briefly review the logistics of the cruise, let’s look at the ports: Barcelona, Naples, Civitavecchia, Livorno, Cannes, Marseilles, and return to Barcelona.  The first day was at sea and the rest of the time we sailed at night and were in the port early the next day.  We only did two tours:  Sorrento and Pompeii in the port of Naples and Florence and Leaning Tower of Pisa in the port of Livorno.  Both were great tours and we are glad that we did not miss them.  The fact that we did not do additional touring was fine with us.  It gave us a chance to “recover” and relax.

The ship is huge and that is a mixed blessing.  At times the noise and crowds were almost overwhelming.  One day I sat in the coffee lounge to work on the blog (and enjoy my $5 latte) with my Bose noise cancelling ear buds in and the noise was still annoying.   The Bose system makes a plane almost perfectly quiet, so you can imagine how loud the ship was.  Those of you who know me very well, know that loud noises and crowds drive me crazy, or as Pat says crazier.  On the plus side, the ship is beautiful and the staff could not have been more pleasant.  As with any cruise, the food is great and plentiful {groan}.

Most of the ships we have been on have formal dining where each night you dress up and sit at the same table with the same folks in a very lavish dining room .  That has some advantages.  The service is impeccable and the wait staff really get to know you.  The menus on those cruises were remarkable.  Norwegian uses a “FreeStyle” system where you choose from about four free restaurants/cafeterias and about the same number of “exclusive” restaurants that you pay for the meal. You dine where you want, when you want. With the exception of the meal that SU paid for, we chose to eat in a great free restaurant called Taste.  It could be compared to a fairly fancy restaurant in the states with great menus and excellent food.  It was fairly quiet and the wait staff really pampered you.  Dress code for the restaurants is fairly lax and you don’t need to pack fancy clothes.

So far, the trains have been great.  We have had to pay a relatively small reservation fee (in addition to our Eurail passes), but that gets you first class seating on a high speed train.  I have glanced up occasionally and have seen speeds as high as 282 Kph or about 175 MPH!

Well, we are at our apartment and it is great.  I will  give you more detail in the next post.  I am on the apartment Wifi so that I can post this blog and it is heaven to have a normal speed connection.