First of all, my apologies – I messed up both the link and the code for the map of our apartment in the last blog post.  The link was an operator error thing (doesn’t happen often {grin}), while the blog map code was an honest error.  It turns out we had crossed the prime meridian and instead of entering the normal negative value longitude, I needed to make the value a positive number.  Here is correct map link

Our tour Saturday was to the Sagrada Familia.  We had booked tour reservations on the internet a few days prior (can be several hours wait in line if you don’t).  This is a very famous structure that can almost be described as excessive.  That said, it is a startling structure link.  Construction was started in 1882 and continues today.  The structure is massive, so massive that it is very hard to capture with something like a phone camera.  The following two photos were repurposed from the internet. 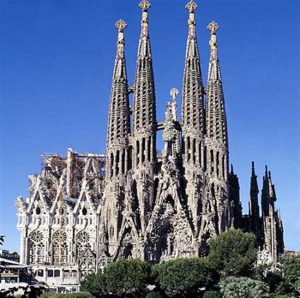 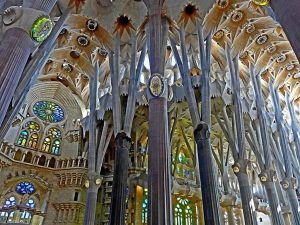 After our tour, we had lunch at a small sidewalk cafe.  Pat had a cheese sandwich and I had what we often refer to as a “mystery meat” and cheese sandwich.  I also had a beer.  The two photos below show us having lunch and a second picture of Sagrada Familia in the background with our sidewalk café in the foreground. 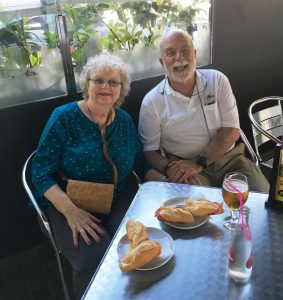 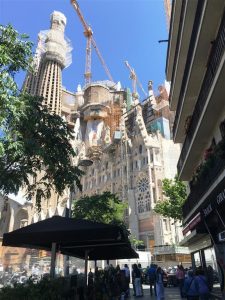 From the Sagrada Familia, we caught our “hop on hop off” bus and made most of what they call the blue route.  We then transferred to the red route that we had done the day before so that we could get to the World Trade Center and catch a taxi home.  In the typical Shepherd fashion, our tour bus broke down.  We got on another bus and finally got back to the apartment.

We have mentioned our meals and the challenges of finding a place to dine out.  Instead, we often chose to make sandwiches in the apartment as shown in the photo below.  Bear in mind that this is not all bad, since the bread is wonderful and nothing like you would get in the typical store in Denver. 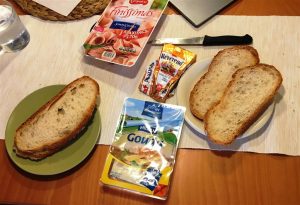 I have mentioned finding coffee in various locations surrounding our apartments.  I never saw a coffee pot in the many places I visited.  Instead, all coffee was freshly brewed with espresso machines.  I always ordered “Café Americano” which is espresso with some hot water added.  It is a bit strong, but tastes great.

Again repeating, both of our Airbnb apartments have been in the middle of the local “hustle bustle”.  They locations were a mix of businesses and apartments.  The photo below shows the street that our Barcelona apartment was on. 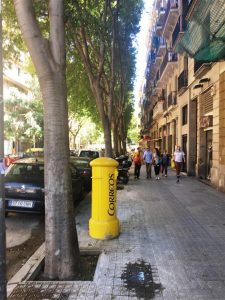 We were amazed at the number of dogs we saw in both Madrid and Barcelona.  We had noted that in the past and had commented on the owners not cleaning up after their dogs.   That has improved quite a bit, but you still have to watch where you walk.  Every imaginable breed of dog was observed.  Most were of the smaller variety, but we saw some rather large breeds as well.

As I finish this blog, we are on the ship.  I will use the internet on the ship to post it.  The ship internet is provided by satellite and is a bit slow.  In the past it was quite costly.  This time we paid for unlimited and the cost was about $200.  Still costly, but at least we will not be fighting the terrible “use meter” when we are on line.  Part of the reason for getting the unlimited is that we need to do some research for the rest of the trip.  We have quite a bit of the itinerary nailed down, but there are gaps that we need work on.

Speaking of internet and research, that has really changed since the last time we were in Europe.  I had mentioned that internet connection was pretty readily available now, and that has made it possible to better document our travels, arrange tours, arrange Airbnb reservations, schedule taxis, etc.  Probably the best resource is the online train schedule.  That really lets us look at our options and select the best routes/stops to maximize our enjoyment.

This entry was posted in Uncategorized and tagged Barcelona, Coffee, Sagrada Familia. Bookmark the permalink.