After our last post, Pat looked at the picture of the beautiful canyon and said that it did not come close to capturing the beauty of the area.  It turns out that we lucked out on the weather.  Since then, it has been cold, windy and rainy. 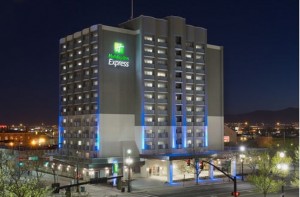 Yesterday was the first day of Pat’s convention.  Stampin’ Up! has drastically changed the format.  They are really not having the convention as we knew it in past years.  Instead they are having what is called “OnStage Live Event”.  In my mind it is a mini-convention and they are held in different places around the world.  With the change in format, the attendance is around 900 demonstrators as compared to as many as 7000 several years ago.  That said, there is no lack of enthusiasm and the demonstrators seem to be having a ball.

Last night was a special dinner event for the top level demonstrators.  Pat invited me to attend with her.  It was held at an amazing hotel not far from where we are staying:  The Grand American Hotel (see picture).  The hotel was completed in 2002 but was built in a 19th century style. 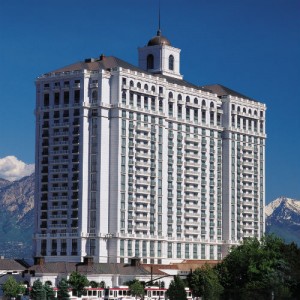 A 2002 WSJ gave great detail about the no expenses barred approach to building the hotel.  Below is one paragraph from that article:

Completed this winter (2002) after five years of construction, the massive Grand America is more reminiscent of the grandiose 19th century than the cost-conscious 21st. Its 350,000 square feet of granite were quarried in Vermont, ferried through the St. Lawrence Seaway and across the Atlantic to be painstakingly cut in San Sebastian, Spain. Then, the granite was shipped back via the Panama Canal and train to Salt Lake City. About 155 full-time painters worked with tiny brushes to detail the hotel's woodwork.

The complete WSJ article can be found here.

The dinner was amazing (both in taste and presentation).  The entertainment was billed as dueling pianos and they were great.  It was a mixture of good music, audience participation and comedy.

Sunday we will head home.  We would normally travel back on US40 at a somewhat leisurely pace.  However, Colorado is predicting huge amounts of snow in the mountains and a ton of rain in the Denver area.  US40 is not a good choice for those conditions.  The choices are retracing our route, going I70 in Colorado or I80 to Cheyenne and then down I25.  We will probably have to make that decision Sunday morning.

This entry was posted in Uncategorized and tagged Salt Lake, snow, Stampin Up. Bookmark the permalink.