Hello from Kent, WA – yet again

Hello from Kent, WA – yet again

We finished our trip up here with a direct drive up I-5, last Sunday.  A bit less than 200 miles.

Monday through Wednesday I taught a “Ball Screw” class.  It was held on first shift, which meant that I got to get up at 4:00 AM to be all ready to start the class at 6:00 AM.  It was a small class, but we got some great things accomplished.

Thursday, was a “day of rest” at the hotel.  We did go down the Pike Market Place and had the great seafood bowl at the Crab Pot.  We described it in this post (link)

Friday we drove up the east and north sides of the Olympic Peninsula.  Their site (link)  describes the area as follows:

Bordered on the west by the Pacific Ocean, on the east by the Hood Canal and on the north by the Strait of Juan de Fuca, the Olympic Peninsula is anchored by the majestic Olympic Mountains. No other place in America can match its diversity in terrain and weather in such a compact geographic area.

By far, the most beautiful part of the drive was highway 112 on the north side of the peninsula.  The highway is a mix of near rain forest and beautiful shore.  I have included one photo that does not do the scenery justice. 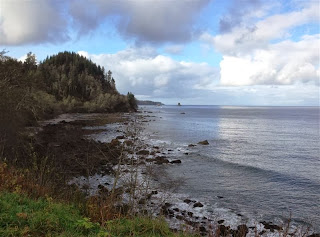 Highway 112 ends at the border of the Makah Indian Reservation.  If you drive another few miles, you come to Neah Bay, WA.  As we pulled in, there was a neat rainbow over the bay (see photo).  It appeared that most of the boats in the marina were fishing boats. 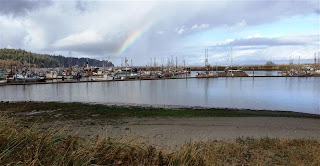 The drive up the Olympic Peninsula and back was right at 400 miles!!  Long day, but worth the effort.  The only down side was the we got into the “rush hour” traffic.  I have to say that most any time of day is dicey in Seattle, but both Thursday and Friday nights were close to gridlock.

That is all of now.