Well, as Paul Harvey would say:  “now for the rest of the story”.

After teaching the class in Denver I was supposed to catch a 10:00 pm flight to Salt Lake to meet up with Pat at her convention. Well the plane was three hours late and I got to the room at 3:11 am  That is two weeks in a row.  As I mentioned in a previous post,  a bit over a week ago,  I was flying back from Seattle (taught a class at Boeing) and that plane was delayed 4 hours (got home just before 5:00 am). Did I mention that I hate flying?

Friday was my birthday (71, but who is counting?).  I had hoped to at least be in the air to Salt Lake by the end of the day – didn’t happen.  As you read the rest of this post, you will see that I had a great belated birthday.

Pat and I are staying at the Hilton Inn, City Center (map).  She would have preferred to stay at the Marriott, but they were booked up – even though she registered for the convention (and rooms) within minutes of the site going on line.  She said that there were 5800 Stampin’ Up! demonstrators attending this year.  That is up from past years, but this was the 25th anniversary convention.

Pat and I got to have dinner last night with a great bus friend and his wife.  I always try to see Kent when I am in the area.  He has has been fighting cancer for several years and has managed to “beat the odds” through some experimental treatments.  You would not know about his journey, as he handles the situation much better than most folks would in the same situation.

We also got to attend a very special Mormon Tabernacle concert. The performance included both the choir and and orchestra as well as two extremely talented guest artists:  Nathan Pacheco and Lindsey Stirling.  The concert is free, but you need to order tickets early.  Words can’t describe how amazing the concert was!!  Then to top it off when we came out, the full moon was right over the beautiful spires in Temple Square (see photo). 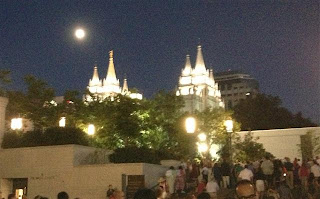 I am actually posting this from Salt Lake.  We are in the airport waiting for -are you ready?- a delayed flight!  Right now, the delay is only 40 minutes – yeah sure!

We had a very leisure morning today.  Pat was tired from her convention and I was tired from lack of sleep.  We arranged a late check out and that allowed us to have nice, albeit expensive, breakfast at the hotel.

This entry was posted in Uncategorized and tagged Kent, Mormon Tabernacle Choir Concert, Salt Lake, Stampin Up. Bookmark the permalink.