There is so much to write about in order to capture some of the details of the trip.  I wanted to catch up on a few details.
Sigatoka has had many major floods over the years.  When I talked to the Chief, I asked him when the village was built.  He said 1964 and it was built to replace the village that was wiped out in a flood.  In 2009 they had a major flood that destroyed the bridge to Sigatoka.  Last year they had a flood that wiped out about 80% of the crop just as it was ready to harvest.

Like many of the places we have visited over the years, Fiji has a huge contrast in the economic status of the citizens.  We are actually in an area called Denarau.  It has several upscale resorts and a residential area called the Cove.  In the Cove, the houses are huge and there are small yachts docked at the homes.  About 10 miles from here in the actual town of Nadi, the businesses are very much like those in Mexican border towns.

Once you get into the rural communities, the living accommodations are very primitive.  In many cases the kids have to wade or swim a major river to get to school.  It appears that many of the people in these areas are small farmers who work the fields using horses or cattle to pull the implements.

That said, many/most of the people of Fiji that we interacted with seem to be very happy.  I always try to gauge how sincere the friendly attitude really is, but it does appear that they are welcoming people.  All of the guides are very outgoing and have a great sense of humor.

The tour had told us that all of us must remove our hats when in the village.  In addition the women had been advised to wear “modest” clothes.  When we got to  Sigatoka The women were given sarongs to wear in the village (see photo). 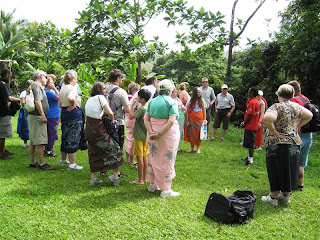 The kids in the village seemed to be happy and liked to interact with the visitors.  I fell in love with one little boy who seemed to be very inquisitive about us.  He was visiting with his grandfather (who was a major participant in the “ritual”).  The boy was very shy, but when I put my hand out for a “high five” he lit up (see my friend in the photo). 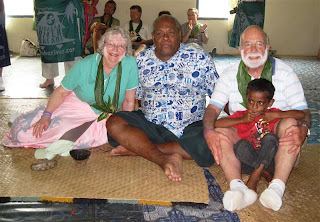 While English is one of two major languages (was one of the British Colonies at one time), it seems that most of the population speak the other major language: Fijian.  When we were on our tour, we found it hard to communicate with the people of the village.

Fiji’s major agricultural product was, at one time, sugar cane.  Today, sugar cane is still grown on small farms (one estimate suggests about 22,000 small farms) and there are four sugar mills still operating.  They are outdated and are said to be unprofitable.  In spite of the decline in the sugar industry, they still export about 250 thousand tons each year and 45,000 people are employed directly or indirectly by the industry.  The cane is shipped to the mills on very old narrow-gauge trains.

It appears that the rest of the agricultural industry produces crops for local consumption.  That includes a huge variety of fruits and vegetables.  We saw a few cows, but it would not appear to be enough to support the necessary meat supply for a population that is a bit less than one million.  We did see lots of chickens and that seems to be a big part of the diet.

Fiji is also a major exporter of hardwoods – primarily mahogany.  The British planted the mahogany trees in the ’50s and they are now mature.  Commercial fishing is also an important industry.

One phrase you hear all of the time is “Fiji Time”.  The information source I cited in the last post makes the tongue-in-cheek observation that maybe the slow life style is partly a result of the consumption of Kava.  In any case, the country does, indeed, operate on Fiji Time.  The generalization is that Fijians are relaxed and don’t seem to have an urgency to operate by the clock.

This entry was posted in Uncategorized and tagged Fiji, Fiji facts. Bookmark the permalink.