Posted on March 20, 2010 by beltguy
Hello from Algodones, NM
Saturday Morning March 20, 2010 (Second travelogue of this trip).
We are at the campground at Hollywood Casino (also called San Felipe’s Hollywood Casino) map. Their website is here. It really is a hole-in-the-wall casino with a so-so buffet. However, it is conveniently located and their campground has 50 amp power at each site as well as water and dump station remote to the site. To top it off, it is only $10 per night.
In our last travelogue I talked about the light at the end of the tunnel. The jury is still out on the source of that light. The weather is still not good and the bus had a couple of minor issues yesterday.
We have about 2 inches of snow and darn cold weather here this morning. I guess I should be glad that we are not home where the TV reports 2 feet of snow in Conifer! I have included a photo of the bus here in the snow. 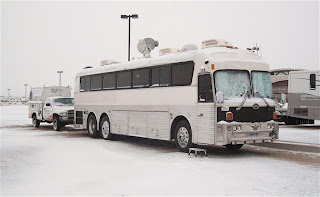 In addition, the electronics in the engine/transmission caused some problems yesterday. There is a connection between the two that allow them to “talk” to each other. The technology is called J1939 for the “techies”. Before we left I got an error code that the connection was “broken”. I played with a connection and the code went away. However yesterday it occurred two times. Same connection. The connector is a premium quality special unit designed for the rather critical communication process. I have closely inspected the connector, used contact cleaner and di-electric grease. Still the problem. Fortunately it only takes a minute or two to pull and reconnect the connector and that seems to cure the problem for a while. Worst case, I can probably eliminate the connector as a temporary fix.
We think Pat has to be at the fairgrounds tomorrow to sell tickets for her classes. We had planned to move to the fairgrounds in the bus today, but we will probably stay here again tonight and take her in the service truck tomorrow. She needs to be there early in the morning. I will then come back and drive the bus to the vendor parking area.
That is all for now.
This entry was posted in Uncategorized and tagged Hollywood Casino, snow. Bookmark the permalink.