Posted on March 19, 2010 by beltguy
Hello from Wagon Mound, NM
Subtitled: What is that light at the end of the tunnel?
Thursday evening March 18, 2010 (First travelogue of this trip).
Let’s talk about the sub title first. I have wanted to make many posts in recent months, but either Pat or I vetoed the content – it was just too negative. Since our bus experienced its engine problems in July of last year, the events of our lives have been considerably less than what would be contained in a fairy tail. Maybe a nightmare type movie would better describe our lives. Bear in mind, that it probably seems worse, since the rest of our lives have been mostly trouble free and we feel very fortunate for that.
First was the real downer of not having the bus. In some of our travelogues, we detailed our disdain for traveling by more conventional means and staying in Motels. Hugely costly and often very frustrating.

Getting the bus repaired was a true nightmare. We could not afford to rebuild the engine and had to settle for a reasonably good used engine (I hope – it was rebuilt about 220K miles ago – not much mileage for a big truck diesel engine). I won’t go into all of the sordid details, but I have been working on it pretty steadily since September and just got it on the road last weekend. As most of you know, the engine and transmission are huge and that makes everything more difficult (see photos). In addition, both the engine and transmission are fully electronic and I have had some serious issues with both units. Lastly, all of the work was done in my shop. Many days the temperature outside was below zero and even with my torpedo heater, it would usually only get to 35 degrees many days. 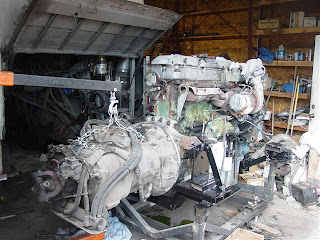 Our next downer was the weather this winter. I have lived in Colorado all of my life and I don’t recall it ever being this bad. I wrote about our big Oct. snowstorm (here). That snow is still on the ground – even in the open areas and on our deck. Every time I needed to test the bus, it snowed. It has been generally very cold most of the winter and our heating bills are off the map.

Next downer was been the economic issues that we are all having to deal with. I keep thinking it will get better, but I don’t see it happening.
Lastly, our daughters and their families have had some pretty serious health issues. Those issues really eat at your psyche.
Now, what is that light at the end of the tunnel that I mentioned? I can only hope it is that beautiful sun the we crave so badly. Hopefully it is not a train headlight. So, lets talk about why the light might not be a train. The bus is running and we left on our first trip today. The weather is slowly getting better. It has been nice in Evergreen for the last few days. However, we had to beat a path today to get out of a snow storm that is predicted to dump a bunch of snow in the Denver area. The economic issues are still not good, but we are not alone in that area. And, most importantly, the health issues seem to have gotten much better.
So, maybe our painful eight months will be something in the past.
Now to Wagon Mound. We are (here).  According to Wikipedia: Wagon Mound is a in Mora County, New Mexico, United States. It is named after and located at the foot of a butte called Wagon Mound, which was a landmark for covered wagon trains and traders going up and down the villageSanta Fe Trail and is now Wagon Mound National Historic Landmark. The shape of the mound is said to resemble a Conestoga wagon. As of the 2000 census, the village population was 369.
We are parked in a vacant lot next to a gas station. The town used to have two restaurants, but they are both close. It is about 70 miles south of Raton, NM. We drove about 300 miles today, leaving about 10:30.
Tomorrow we will drive to a favorite stop: Hollywood Casino just north of Albuquerque. That is a short 150 mile drive. We will stay there a couple of days before we drive to the fairgrounds where the FMCA rally will be.
BTW, I was a nervous as a whore in church today, but the bus did very well. Hope that continues.
That is all for now.
This entry was posted in Uncategorized and tagged bus, Cold Weather, light at the end of the tunnel, NM, snow, Wagon Mound. Bookmark the permalink.