Hello again from Kauai, HI Friday morning April 3, 2009 (second travelogue of this trip) As it turns out, this travelogue is written in two parts. The majority was written at the condo, but we had to check out and I did not get it finished. The final part is being written in the Honolulu airport. Now we need to start talking about this island. Kauai is the northern most Hawaiian Island. It is 552 square miles (about 14% the size of the big island). The highest point is Mount Waialeale which is 5080 feet (about 1/3 as high as Mauna Kea of the big island). The mountains of Hawaii are very deceiving. On Kauai, they look sharp and rather tall. On Hawaii, they do not look tall (until you notice the snow), because the slopes are very gradual. Indeed, when you compare the altitude of Mauna Kea, it raise almost 14,000 feet above the base which is said to be a higher elevation differential than Mt. Everest.. This island is called the “Garden Island” for good reason. It gets a lot of rain. At one location the average rail fall is 460 inches! Everywhere you look, the vegetation is very thick and green. The weather here has been windy and we have had quite a bit of rain (normal). That is OK. We have been going at a much more leisurely pace. We had thought about several tours and dismissed most of them. We chose not to go on a whale watching cruise since the ocean swells are rather high and the whales have mostly left this area. I had thought about doing a dive here, but because of the rough seas, I changed my mind. When we were here in 2003, I did a dive with Pat’s brother and his wife, and the diving conditions were not all that great. We talked about the cats and mongooses on the big Island. Here the “wild” animal population is chickens. They are everywhere and the rooster crowing is rather fun (right outside our window as I write this). Domestic type chickens were brought here decades ago. Some folks also brought fighting roosters. The story goes that in 1992 the devastating Hurricane Iniki (third worst damage causing storm in the US) caused all the chickens and roosters to be turned loose and roam free. They do not have natural predators, so the population is quite high. Both islands have very large wild pig populations and they are a big problem. Hunting is permitted at all times. We are staying in a time share that we swapped with our timeshare in FL. It is actually a part of the Westin Hotel (map). As is generally the case, I post a link to a satellite photo of our location. This one is particularly interesting. I double checked the GPS coordinates and the location of the indicator is very close to our building. However, the satellite photo is rather old and does not show the rather extensive complex. Our building is on a high bluff overlooking the ocean. The Westin is in the Princeville area of Kauai. That is on the north shore of the island about 30 miles form Lihue and the airport. It is gorgeous here. One of the first things we did, was to look up the house where Pat and I and several members of her family stayed in 2003. For documentation, the address was: 3948 Anini Rd (map). As the crow flies, it is less than 1 mile from our location. That house was right on the beach. It looks like the place is a bit run-down since we stayed there, but it sure brought back good memories. Monday (3/30) we drove down the west coast and along the south coast and then turned onto the Waimea Canyon road. This road leads up to several overlooks that give a great view of a huge majestic canyon (see photos). This canyon is not as big as the Grand Canyon, but it is spectacular. The road then leads up to the Kalalu Lookout (see photo). This gives a great view of a steep drop-off into the Na Pali coast region of the island. The Na Pali area is remote and can not be accessed by car. I will end the travelogue here. We are supposedly headed home on a 10:00PM flight. Only problem is, Denver is expected to get about a foot of snow and there is a possibility that they will have to cancel the flight. We will finish up the final travelogue in the airport and on the plane and publish it when we get home. 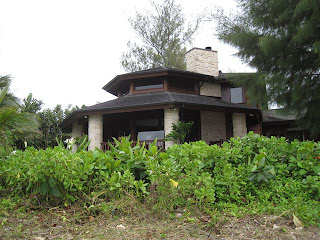 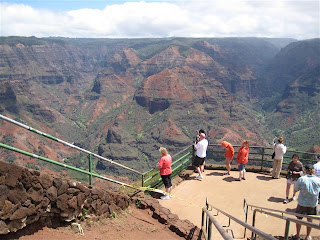 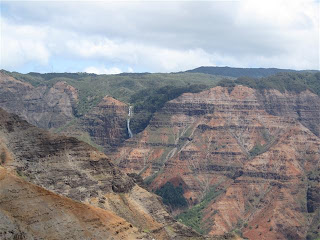 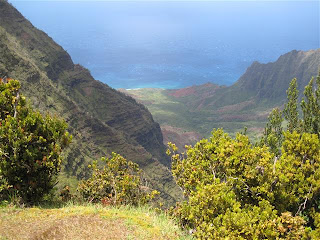