Hello again from Princeville on the island of Kauai, HI

Hello again from Princeville on the island of Kauai, HI Tuesday evening March 31, 2009 (Second travelogue of this trip) Wow, I feel like I am so far behind on this travelogue!!! Lets try to finish the details of our stay on the “Big Island” last week. In the next travelogue I will start on the details of our stay on this island. On Wednesday we took a “Sunset Cruise” that had a buffet dinner and some whale watching. This was a sailing catamaran. They did raise the sail, but we really did not do much sailing – most of the cruise was done with the engines. It was a fun cruise and we did see a few whales. Pat’s brother and wife took the same cruise a couple of weeks earlier and saw a very large number of whale. It appears that we are on the tail end of the whale season. They have had their babies and are starting to head towards Alaska. On Thursday (3/26), I did a two tank dive just off the shore and a bit north of the hotel. The first dive was great. We saw two sharks, an manta ray, and a small eel. The coral was magnificent. I was able to control my air and that combined with a relatively shallow dive (about 50 feet) let me stay down for over 50 minutes. The temperature of the water was in the mid 70s so a wet suit was necessary. The second diver was a challenge. I could not seem to adjust my buoyancy. Part of it was that I was a bit tired from the first dive, as we had to work harder than normal because of the wave action. The second dive was still fun, but a bit frustrating. The dive boat was rather small and there were only three of us diving (plus the dive masters). The seas were a bit rough, so the ride was “exhilarating”. We saw several whales in the distance. One was slapping his tail repeatedly. The big island has a huge population of feral cats. The story goes that various ships brought in rats by accident several decades ago. Then they imported cats to deal with the rats. That did not work out well. Then they brought in mongoose. That also did not work out well, since the mongoose is out in the daytime and rats are nocturnal. We saw a ton of cats, and a few mongooses (yes, that is the correct plural form). An decent site on mongooses is: http://en.wikipedia.org/wiki/Mongoose. Both are said to be a real problem. We did not see any rats, but I think they are also a problem. On Thursday night Stampin’ Up! hosted a fantastic luau. There were over 400 demonstrators that earned the trip. Each had a guest/spouse and many also had additional guests. Thus there were over 1000 people at the event. Luau’s are served buffet style and this one had a huge variety of great food. Most of the dishes were typical Hawaiian cuisine. The entertainment was super and extensive. The event was held outside and the weather was perfect. Last time I touched on some of the geography of the island. It has two mountains/volcanoes that are nearly 14,000 feet. Mauna Kea is the tallest mountain on the island of Hawaii and also the tallest mountain in the state. However, they have very gradual slopes and they looked more like tall rolling hills, till you see the snow at the higher elevations. (see photo) The state of Hawaii is a bit confusing. It consists of several islands. The capital is on the island of Oahu. The largest island is Hawaii. It is the furtherest south island in the chain and the largest (4038 square miles). There are some interesting facts that are unique to the state: 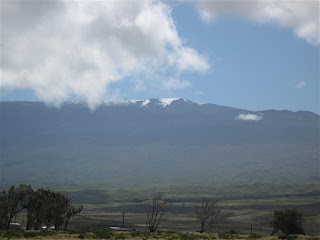