Hello from Princeville on the island of Kauai, HI

Hello from Princeville on the island of Kauai, HI Sunday morning March 29, 2009 (first travelogue of this trip) In the past we have noted that Pat has earned several great trips through her association with Stampin’ Up! (http://stampinlady.com/). This was our eighth trip. The first trip was a cruise to Bermuda in 2002. That was followed by Hawaiian cruise in 2003. All of the trips have been cruises with the exception of this trip. I should add that all expenses are paid by Stampin’ Up! This trip was to the fabulous Hilton Waikoloa Village Resort (map). This resort is located on the north western coast of the “Big Island” (Hawaii). The resort is huge and has several buildings spread over a vast area. While you can walk to the various locations, it is much more convenient (and fun) to take either a boat, or a train. The resort is located right on the beach. Several folks saw whales from their rooms. Our room did not have a direct view of the ocean. Our view was of the beautiful golf course. The landscaping is beyond description. Stampin’ Up! paid for five nights plus air fare. To give you a feeling for the quality of this facility, we went in a day early and paid for one night ($290). They also provided a very generous daily food allowance. As if that were not enough, they provide great gifts each night in the room. We rented a car since it is very hard to do any sightseeing without one. One of our self-guided tours took us on the northern part of the island loop over to the east coast and close to Hilo. One of our stops was at the great Akaka falls. There are two huge falls and you walk through what we would think of as a rain forest. The next day we went down the western coast to the Kona Coffee area. This is a designated area 1 mile wide and 50 miles long that produces the very special Kona coffee. We toured a great little coffee plantation (Holualoa Coffee Company) that grows and processes the coffee beans. Most of the plantations are rather small farms passed down from generation to generation. On Tuesday we took a 10-hour bus tour that made the full circle trip around the island (260 miles). Our driver talked non-stop the whole trip. I found his presentation fascinating. The three highlights of the trip were the tour of the Hawaii Volcanoes National Park where we observed the Kilauea Caldera, the hike to the Thurston Lava Tube, and the rainbow falls. All of the Hawaiian island are formed from volcano eruptions. There are still active volcanoes and Kilauea is one of them. Recently, the Kilauea crater blew open and we were able to observe the steam coming from the opening. We ate lunch at the hotel overlooking the crater. The Thurston Lava tube is fascinating. You hike through a very dense tropical forest and then enter what is essentially a long tunnel. The tunnel is formed by cooled lava surrounding the lava flow. When the flow stops, the hot lava flows out, leaving the tube. This tube is perhaps 100 yards long and the bore is about 10 feet in diameter. Lava is very porous and we had water dripping on us as we walked through the tube. The Big Island has landscape extremes. On the north west part of the island it is basically a desert. The land is mostly covered in lava. As you head south along the west coast, about half way down there is increasing amounts of vegetation, especially in the Kona Coffee area. Further south, there are stretches where there is almost no vegetation. On the east coast, the type of lava has produced abundant vegetation. Indeed, this is where the vast sugarcane fields produced great corps (sugarcane is no longer grown in Hawaii because of economic issues). In addition to the vast farm areas, there are several rain forests. I will continue our discussion about our adventures on this island in the next installment. 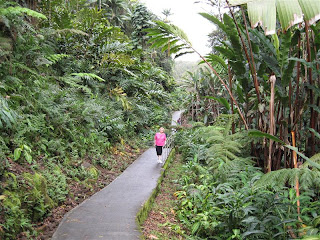 Pat on the trail to Akaka Falls 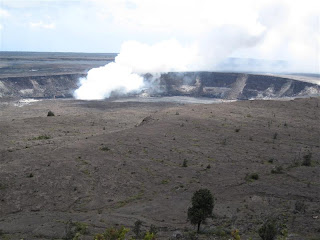 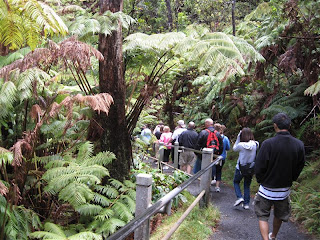