On Thursday we took a great van tour of the downtown part of the city.  It mentioned that it would include the French Quarter.  Well, it did go through the east edge of the French Quarter which is still in pretty good condition.  The guide made a comment about not going to Bourbon Street (making it clear that it was no longer a tourist area).  We drove several miles going through areas that were drastically different.  One of the areas showed some of the terrible destruction caused by Hurricane Katrina. Hurricane Katrina was a large and destructive Category 5 Atlantic hurricane that caused over 1,800 fatalities and $125 billion in damage in late August 2005.  The guide mentioned that the area was under 11 feet of water.

The tour also included stops at a cemetery and Café Du Monde.  Burial in the cemeteries is above ground in tombs.  New Orleans is 8 feet below sea level and the water table is right at the surface.  The tombs are beautiful and I have included a photo.  Café Du Monde is a must stop place according to most sources.  It is famous for its tasty beignets and coffee. 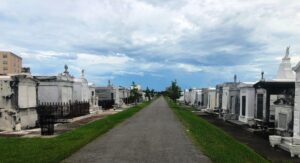 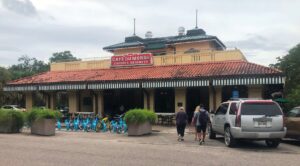 The tour also took us into what is called Uptown New Orleans.  This area is just south of the French Quarter and is quite a contrast.  Some of the homes are mansions and the whole area is beautiful.  As a side note, most folks, myself included, think the famous Mardi Gras parade is in the French Quarter.  It is not.  It actually follows part of the St Charles streetcar route in Uptown New Orleans.

Our hotel stay has been a bit of an experience.  We (actually, Stampin’ Up!) had reserved a “river view” room.  That would be in the east tower.  However, it was closed because of water and AC problems.  They put us in a nice handicapped room in the west tower.  It had a good view of Canal street and was OK with us – until we discovered that we did not have hot water.  They then moved us to the now open east tower and we have an incredible corner room on the 28th floor that overlooks both Canal Street and the Mississippi river. 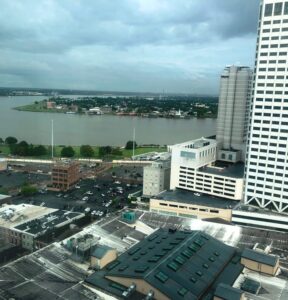 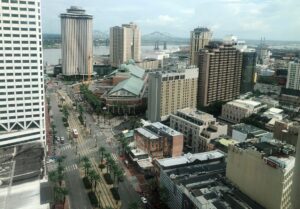 The rooms are not terribly expensive (about $140 group rate) but they get you in other ways.  For example it is $45 per night to park the car.  The internet is $12.95 per day.  Breakfast is $25.  You get the idea.  Fortunately, I can use my cell phone hot spot for the internet.  The elevators are really interesting.  You enter your floor number in a keypad in foyer and it tell you what elevator to take.  When you get on the elevator, there are no button to push.  It takes you to the floor you entered.

Pat has been attending her conference the past few days.   Thursday was an evening event and the main events were Friday and Saturday.  This is a conference for the higher-level demonstrators so the attendance is much smaller than the general meetings of the past.  That said, she thinks there are around 600 folks from all over the world attending.

The weather has been crazy.  On our trip down here, we went through the Ft Worth/Dallas, TX and Jackson, MS areas.  Both had substantial flooding shortly after we passed through and were the subject of national news.  I think I heard that one of the areas got 11 inches of rain in one day.  The Texas area had been suffering from a major drought before all the rain hit.  We have hit some pretty bad rainstorms, but it has not been a huge problem.  We did buy an umbrella and had to use it a couple of times.  The rain has kept the temperature in the 80s so it has been bearable albeit very humid.

Again, this has gotten a bit long so I will stop here and probably add more details in the next post.