Before I start in with this post, I need to make a correction to the first post.  When I mentioned the HGTV TV show from Waco, I incorrectly called it “Home Improvement” rather than “Fixer Upper”.

Now to New Orleans.  I need to set the stage for my comments later in this post.  In the 50’s my folks and I came down here three or four times.  We stayed at the historic 4 star Hotel Monteleone on Royal Street in the French Quarters.  These were magical trips that I remember so well.  My folks would sneak me into the local bars so that we could all listen to the wonderful Dixieland/Jazz music. Royal Street was one block over from the famous Bourbon Street.  Everywhere you went, you would hear the wonderful music and see happy people.  BTW, Pat and I walked to that hotel (couple of blocks) and the exterior is being renovated, but the interior  still has the grand/beautiful/historic lobby.  I have included a photo we took. 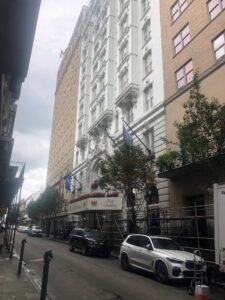 Fast forward to sometime in the early 80’s and I made a customer call in New Orleans.  As I recall I stayed downtown – probably at the Sheraton which is just across the street from our hotel.  I was fortunate enough to attend a Pete Fountain show (Al Hirt showed up as well).  That was the good part.  The bad part was that I walked down Bourbon Street and it was terrible.  No good music and mostly tee shirt shops.

Fast forward, again, to this trip and I again walked down Bourbon Street and it broke my heart.  Every corner had drug addicts, prostitutes, and panhandlers.  The streets were dirty, and the streets and sidewalks were in terrible condition.  About half the businesses were closed and those that were open were not at all related to the old French Quarter.  Canal Street is the street that runs in front of our hotel.  It a main thoroughfare and has lots of streetcars and active businesses.  That said, almost every corner on this street also has the same people problem that exists in almost every part of the French Quarter I walked to.

So much for the bad part of our visit here.  Now for the more positive items.

Monday, we went on a paddle boat ride on the Mississippi River.  We paid for the Cajon dinner on the boat and it was great.  The boat went up and down the river for a few miles.  At first, I figured that the boat was a fake paddle wheel vessel.  Not so.  It is a recreated actual paddle wheel with modern diesel/electric propulsion.  I spent a lot of time looking at the mechanics of the drive system.

Daughter Lisa works with a surgeon who is very familiar with this area.  He gave us a few tips on places to go.  Wednesday, we went to a “unique” restaurant called Jacques-Imo’s (website) recommended by Dr. Schoen.  Without question I use the term “unique” advisedly. I have attached a picture of the front of the building and you might be able to read their slogan:  “Warm Beer – Lousy Food – Poor Service “.  Of course, it was anything but that slogan.  It is a crazy upscale restaurant where you have to walk through the kitchen to get to the dining area (another photo).  Their specialty is “real Nawlins’ food”.  Pat had Shrimp Creole and I had Crawfish Etouffee.  We took a taxi out to the restaurant (several miles from the French Quarter) and rode the streetcar back. 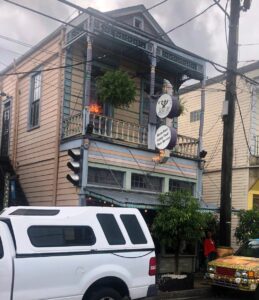 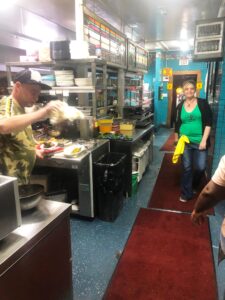 Going through the kitchen to get to the dining area

Ok, I have mentioned streetcars twice so far in this post.  The transit system has an extensive streetcar system in the downtown area.  These are actual streetcars — as opposed to trolleys — since they run on rails.  Most of the lines have relatively new cars.  However, the historic St Charles line is a must ride.  Here is a bit of verbiage from the website:

“The dark green St. Charles streetcar is the oldest continuously operating streetcar line in the world.   Vintage streetcars built by Perley A. Thomas Company still run along a 6-mile crescent from Carondelet at Canal Street in the Central Business District through the oldest and most majestic section of Uptown New Orleans, around the Riverbend to Carrollton at Claiborne Avenue”. 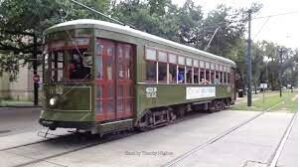 We rode the St Charles line Wednesday morning, and it was an amazing trip.  It turns out that that is the same line we took on our return trip from Jacques-Imo’s that evening.

This post is getting a bit long, so I will continue with more details in the next post.