Friday we travelled from Torrey, UT to Cedar City,UT.  Our route took us over the famous “Southern Utah Scenic Byway 12” (link to information and pictures).  We traveled this route in 2013 but the opposite direction.  Going from east to west seemed quite different from the other direction.  Either way is an amazing drive.  At one point you are on the spine of the rock formation and there are steep cliffs on both sides of the road (see picture). 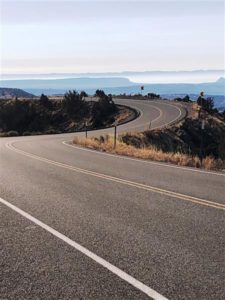 Towards the west end of highway 12 we drove into Bryce Canyon National Park.  While we have seen this park several times, it never fails to amaze us with the incredible views.  I am posting a couple of  pictures of Bryce Canyon, but they don’t begin to do justice to the splendor of the canyon. 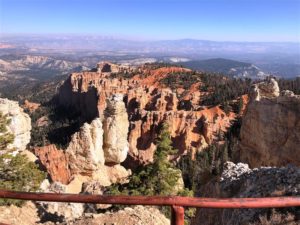 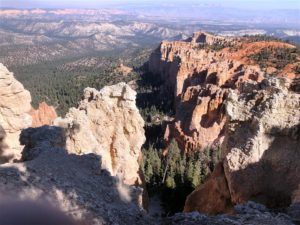 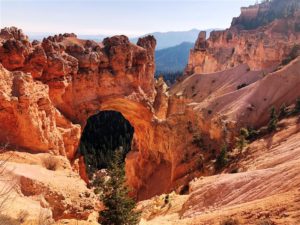 After touring the park, we drove to Cedar City for the night.  It turns out that we had to adjust our itinerary a bit because several Holiday Inns were booked up.

From Cedar City we made a fairly short drive to Mesquite, NV and stayed in a beautiful Holiday Inn with a room that had a balcony which overlooked the pool as well as the whole valley.  Pat was able to spend a couple of afternoons playing the slots, while I did some computer projects.

Today we drove from Mesquite to Pahrump.  We are using this location to make some day trips into an area we fell in love with several years ago.   Our first trip to the area was during our inaugural trip in the Bus (2006).  A few years ago I uploaded what was then an email blog to our blog/travelogue.  Two of the posts from that travelogue will give you background as to how we discovered the area and why we loved it so much:  (2006 Inaugural Bus Trip post 5) and (2006 Inaugural Bus Trip post 6).

To summarize those two posts we found the tiny town of Shoshone, CA from a book that we carried which listed all of the hot springs in the south west.  That led us to a small campground that was pretty bare bones, but just right for us to “hide out” and relax.  From there we ventured into Death Valley.  We would never have chosen to tour that area, but once we did, we were blasted away by the amazing diversity of scenic wonders that the park has to offer.  We subsequently went back to the area a couple of more times over the year.

We had hoped to stay in Shoshone but the one motel is very basic, yet charges a fortune for the rooms.  If we had the bus with us we would have stayed in the campground.  The other issue  is that there is no cell service in the area.  In the past we would drive to Pahrump to make our calls (about 30 miles).

We will describe our re-visit to the area in the next post or two.

This entry was posted in Uncategorized and tagged Mesquite, Pahrump, Shoshone. Bookmark the permalink.