Uploaded:  Tuesday July 30 due to upload issue with last ISP

We are in our final Airbnb for this trip in Fiumicino, Italy (Google Map Link). 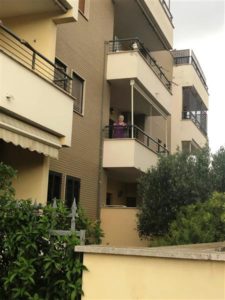 Pat standing on the balcony of our Fiumicino apartment


We chose this location since it is close the Rome airport.  As noted in one of the previous posts the Rome airport is perhaps 25 miles from the center of Rome.  Since we flew in yesterday, it just made sense to stay here.

On this trip we have stayed in seven Airbnb units and no hotels!  All of the units had demand type water heaters.  Some worked OK, some not so good with resulting cold showers.  None of the units had garbage disposals.  Some were in very old buildings and some fairly modern.  The two units in Zagreb were furnished in all IKEA including the silverware!  All were fun/unique experiences. 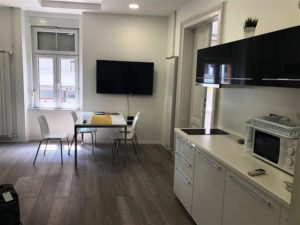 It appears the Airbnb is becoming a significant business in Europe (and maybe the US as well).  The two Airbnb units we stayed at in Zagreb were owned by  two brothers and they own 5 units.  Their folks own several units in Split. Croatia.

Our Eurail passes were not as big of a value to us on this trip to Europe.  First we did not do as much train travel and secondly the quality of the trains (coupled with the heat) cut short some plans to do more train travel.  The photo below shows the main route we traveled from Rome to  Florence to Venice to Ljubljana and finally Zagreb.  You can see that we traveled around the upper part of the Adriatic Sea.  As we noted earlier, we made the decision not to retrace the route (over 20 hours and 5 transfers), but rather to fly to Rome via Athens.  BTW, the photo is a screen capture of an app that I installed on my phone on our last trip to Europe.  It is an amazing tool. 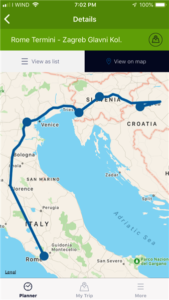 Our train route on this trip

We have talked about the stairs and walking on our trip.  As we have noted the Europeans say that the first floor is the one above the ground level – what we call the second story.   All of our apartments were on the second or third story (US) except one that was on the fifth level (fortunately with an elevator).  All of the apartments we stayed in had very high ceilings which was great, but that meant that each story was much taller than those in the  US.  To give you a feeling, there were 28 stairs going to our second floor (US) second apartment in Zagreb.

As we have noted, we often ate our meals in the apartment (at least the last few stays where we were mostly in the “relaxing” (that translated to too tired and hot to do much {grin}).  We ate a lot of the great bread (much different from our bread) and cheese, plus tomatoes and mozzarella for lunch and an occasional dinner.  For breakfast we had cheese and bread plus yogurt and  Muesli.  Sounds a bit boring, but it really hit the spot. 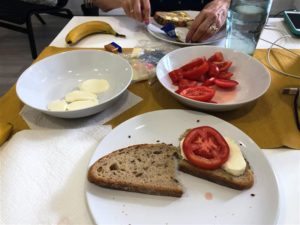 A typical meal when we ate in the apartments

As noted in the last post, we changed to a second Airbnb in Zagreb.  It was closer to the main area of Zagreb.  Indeed, our apartment overlooked what is called a “¾ Grand Union” of trolley tracks.  It is described (and listed) in this link:  https://en.wikipedia.org/wiki/Grand_union.  What that means is that the electric trolleys can come from any direction into the intersection and then, by switching, can go in most any other direction (straight or turn corner).  Obviously I had a ball watching them. 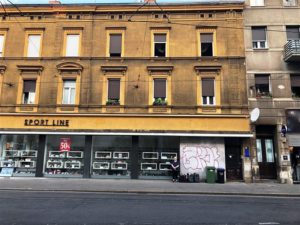 Our second apartment in Zagreb.

We were on the second floor. 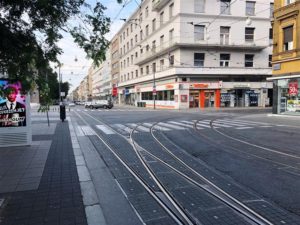 Trolley tracks in front of our apartment

For the most part we stayed in the apartments during the very hot hours of the day and then ventured out in the early evening.  One of our strolls took us to the Zagreb Cathedral and then to a great little restaurant that looked out on the cathedral.  The cathedral was built in the early 13th century.  It is currently undergoing some reconstruction work.  The inside of the cathedral is amazing. 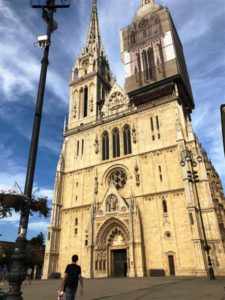 On the way home from our dinner, we stopped at a great little sidewalk snack shop and split a wonderful cherry crepe.  It was so good we went back the next night.

Tomorrow we start our journey home.  Rome to Philadelphia to Denver.

This entry was posted in Uncategorized and tagged Fiumicino Italy, Zagreb. Bookmark the permalink.