We are in our second Airbnb in Zagreb (Google Map link).  We will explain why we are in the second unit later in this post

We had to laugh when we were in Venice, as we frequently observed the boat drivers texting while driving.  I wonder if there is a law about that?   Fortunately, the boats are going very slow and they look up frequently.

I think we have mentioned that we have gone to the grocery stores at most every location we have been in.  That is always an adventure, since we can’t read labels and the products don’t always have a descriptive picture on them.  At first I was going by myself and Pat was getting a little uptight that I would come back with bread and cheese for our breakfast (and sometimes lunch).  The first time she went with me she better understood how difficult it is to  shop.   We have now added yogurt (hard to tell what kind of yogurt you are getting)  and muesli to our breakfast and tomatoes and mozzarella to our lunches.  Of course, we always seem to find a bakery close by and get wonderful desserts. Still we have lots of wonderful bread and cheese {grin}.

I have had a translator app on my phone for sometime and it comes in handy for some of the edible products.  We frequently talk about the “mystery meat” in Europe and the translator helps a bit with that.

The street addresses are very strange to us.  For example, the address of the first apartment in Zagreb was:  Preradovićeva ul. 37, 10000, Zagreb, Croatia.  The street (Preradovićeva ul) was only a few blocks long.  I can’t imagine how the taxi drivers know all the strange streets, but they have not used a map once during our travels.  The other issue is getting a taxi by phone, since there is no way that I can pronounce the street close enough that they can figure out what I am saying.  As I mentioned earlier, some companies will let you schedule via the internet and that is great (plus the taxis are always there at the time you request).

During this trip and in past trips to Europe we have noted that almost every square yard of wall (or doors) is tagged with graffiti.  A very small part of the graffiti could almost be called art, but most of it is just plain terrible looking.

Photo of our first apartment in Zagreb.

Note all of the graffiti.

We were told that the crime rate in Slovenia and Croatia is very low and that you are safe to walk on the streets at night.  That would suggest that the graffiti mentioned above is not gang related (I hope).  However in Italy, the pickpocket issue is a very significant problem.  There were several reports from demonstrators on the trip had been hit (communicated  via a special  Facebook group created  for the trip).  One of the demonstrators from Colorado told us her father had his phone stolen shortly after they got to Rome.

The heat here in Europe (yes I know it is hot in Denver) is really oppressive.  It is quite humid here and that make it feel much more uncomfortable.  This past week it has been in the high nineties each day.  That has caused us do quite a bit less sightseeing and has resulted in revising our travel plans.  To be honest, we were so busy before we left that we did not do a good job of researching our travel.   We wanted to visit new countries and essentially threw a dart or two and ended up in Slovenia and Croatia.  Both are well worth visiting but both countries have presented travel logistic problems (mostly because of the very old trains without AC and schedules that can’t be trusted and are limited in number).

As a result of the heat and train issues, we removed a planned trip to Budapest, Hungary from our itinerary fairly early in the trip and scheduled the second Airbnb here in Zagreb in its place.  Our next major change we the decision not to take the train back to Rome.  Part of the decision was the travel time (about 18 hours), coupled with the large number of transfers needed to make the trip and, the unreliable train schedule (with some very tight transfers).  Another major factor was the issue of getting our luggage to the next train which usually meant several trips up and down the stairs that lead to the train platform.  Lastly, all of the trains were “National” meaning that they were the older trains.  So, we have chosen to bite the bullet and fly from Zagreb to Rome (via Athens).

When we switched to staying in Zagreb an extra three days (instead of going to Budapest), we had given a thought to “cheating” and travelling part way into Hungry and Serbia on day trips to have lunch and add to our country count.  The first issue is that there is some sort of dispute and trains no longer travel from Croatia to Serbia.  The second issue that the train trip into Hungry would be about 3 hours on a hot second class train trip.  So, we are simply enjoying our time in the apartments watching all the activity (great people watching).

As for the travel part of the travelogue, there is not much to report.  Our train from Ljubljana to Zagreb was a National train meaning that it was an older train.  It did have one first class car, but no AC.   With the windows down, it was not too bad.  The scenery was beautiful.  Lots of farm land and wonderful houses that are typical of what we call Swiss architecture.

The first day we got here I walked to a cigar store so that I could purchase a couple of Cuban cigars.  Some background explanation:  First of all,  I have been enjoying a half a cigar most days that I work  in the shop.  That gives me a chance to relax in my comfortable shop chair and it something I enjoy.  But the major factor is based on a cruise that my folks took me on in 1954 (I was 12 years old).  The cruise was to Havana, Cuba.  I vividly remember several places we visited including the amazing Tropicana night club, Morro Castle, and a visit to a cigar factory.  All of cigars were being hand wrapped and I knew at that time that sometime in my life I would smoke a Cuban cigar.  Of course, they are illegal in the USA, but you can buy them in a foreign county and bring them in for personal use legally.

The  temperature drops enough in the early evening that we are able to do some strolling.  Two nights we ended up in a wonderful square about a half mile from the apartment where we had a great dinners. 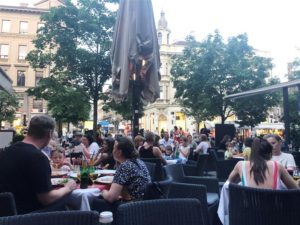 Dinner on the square in Zagreb

This entry was posted in Uncategorized and tagged Cuban Cigar, Zagreb. Bookmark the permalink.