We are in another great Airbnb in Zagreb, Croatia (Google Map Link).  More about Zagreb in the next post.

Stairs, stairs, and more stairs.  We encounter stairs everywhere.  Most of our Airbnb locations are on the second or third floor and each floor is quite a bit taller than in the USA.  In addition to all the stairs, we have been walking some fairly long distances in each of the cities we have been in.  We get pretty tired, but the “fake” knees are doing pretty well {grin}.

Train thoughts.  The trains in Slovenia and Croatia are quite old.  If they have first class (most do not), it is pretty primitive with no AC.  At least one of the trains we rode was over an hour off schedule – not something we are used to in Europe.

We have been to Europe several times together and many more for me on business.  It is fun to compare the changes and similarities between the conditions of our trips.  In the early days, it was almost impossible to find internet connections (much more so that the USA).  Now wi-fi is available in every Airbnb and many restaurants etc. (same as the US and speeds seem comparable).  In the early days you had to change money in every country.  The Euro has change that for the most part (Croatia has its own money).  It continues to be a bit of a challenge to arrange a taxi, but some have internet scheduling (Uber was not available in most places we have been).  Cell phone use for USA phones was not available until recently.  AT&T now offers several plans.  They are all a bit pricey, but the use of your phone is seamless (text, call, internet).

Making my coffee has been a bit of a challenge.  They have very small coffee pots (basically to make an espresso).  The pots have water in the bottom, a strainer that you put coffee (almost a powder) in and then screw the top on.  The water boils up through the strainers (one in the top part as well) and fills the pot on the top with brewed coffee.  A bit old fashioned (we used to use the same system, on a larger scale, in the drugstore I worked at in the 50s), but it works well.

Typical small coffee pot we saw on our trip

Public Bathrooms (water closets in Europe) often charge admission.  Typically it was 1 Euro (bit over a dollar).  That fee did seem to offer a clean facility. 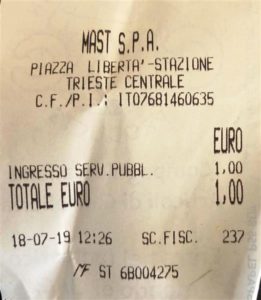 Now back to our travels.  On Thursday (7/18) we traveled to Ljubljana.  It was an “interesting” trip.  The first leg was on a train to Trieste, Italy.  Then we had to switch to a bus.  The transfer time was not all that great and we did not understand that we had to go from the train terminal to the bus terminal (found that out after waiting in line for about 15 minutes).  We had to hustle to the bus station (fairly close), stand in another line to get our tickets (mostly covered by our Eurail pass) and then quickly get to the bus – no stress there.

Ljubljana (pronounced luby-onna) is a fairly modern city.  Our apartment was in the older part of town, but the buildings were probably less than 70 years old.  We had a great apartment on the 5th floor – fortunately we had an elevator.  The apartment had a small balcony that was fun to sit on.  It had a view of the main attraction – the castle and overlooked a fun street café that we ate at a couple of times.  The AC was not functioning (stated that in the apartment information), but the nights cooled down enough that it was not a problem. 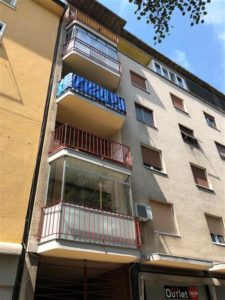 Our apartment in Ljubljana.

Our unit was on the fifth floor (top of photo)

Mr Smiley enjoying a drink on the balcony


BTW, I am aware that the email version of this blog has photo orientation issues.  I have tried to solve the problem (has to do with the data contained within the photo file from our iPhone).  I believe that the above photo may show me standing on my head.

Friday we toured the castle perched high above Ljubljana.  We took the funicular to the top.  From there we walked all around the castle.  It originally dates back to the 11th century.  The views from the castle are spectacular. 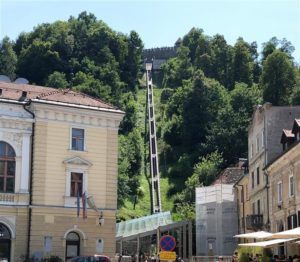 Funicular to the castle 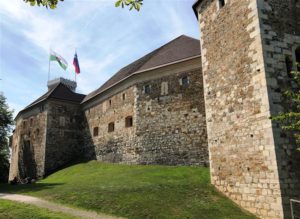 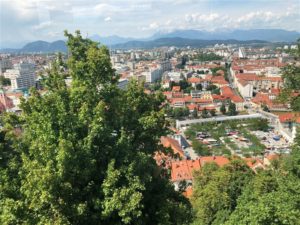 View from the Ljubljana Castle

Saturday we rode the train to Bled, Slovenia (two legs with a total time of about 1.5 hours).  The  train station is about 100-150 feet above Lake Bled.  Lake Bled is very picturesque.  When we arrived at the lake there was a huge international swimming meet including a 1250 meter event.  We took a “train” tour around the lake and had wonderful views of both the castle above the lake and the church on the island in middle of the lake.  We then returned to Ljubljana via the train (second class, no AC, one hour late).  All in all a fun day. 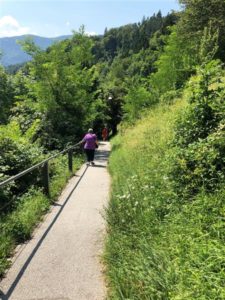 Steep walk from the train station to Lake Bled.

It is over 100 feet vertical walk on a steep trail with many steps at the bottom.

No taxis were available so we had to walk back up (holey crap!!!) 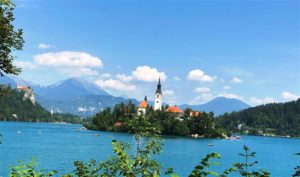 A view of Lake Bled with the church on the island in the middle of the lake.

You can also see the castle on the hill in the left of the photo.

(Yes, I took this picture and am kind of proud of it.) 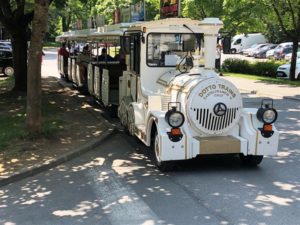 We took this “train” around the lake. 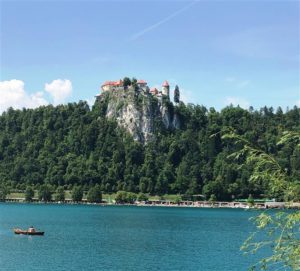 This entry was posted in Uncategorized and tagged Lake Bled, Ljubljana, Ljubljana Castle. Bookmark the permalink.