We are in a great Airbnb in Ljubljana, Slovenia (Google Map link)

We still get robo calls over here, but the problem is that they come in the middle of the night {Grrrrr}.

Trying to use Google maps to navigate between locations in a town is a real challenge.  If you zoom in on any of the Google Map links from Italy, you will see than none of the streets run in any “planned” scheme. For reference, a good map would be:  (Google Map Link of apartment in Venice) [BTW, you can zoom in and out on those maps].  Most streets are only a block or two long (some main streets are a bit better about lending themselves to navigation.  In the photo below from Venice, you will see me standing in one of the hundreds of walkways that are in addition to what we would call streets (in Venice there are no streets, as there are no cars).  Google “sees” the walkways, but there could be 3 or 4 in a USA block length and it is really hard to tell which one Google wants us to take and they dart in various direction.  Worse yet, many of the walkways look like they are dead end, but simply take a jog. 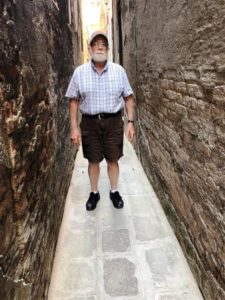 Now for some Venice highlights.

We traveled from Florence to Venice via train on Tuesday (7/16).  The apartment was on the second floor so  not so many steps to climb.  It was a quaint apartment. 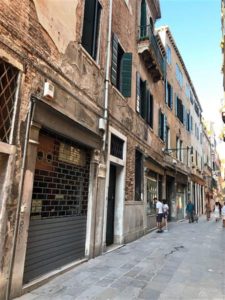 Our apartment in Venice 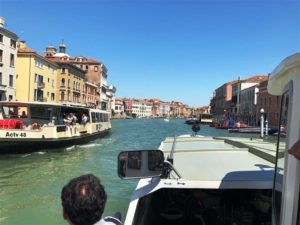 A view from our water taxi on the Grand Canal

on the way from the train station to our apartment 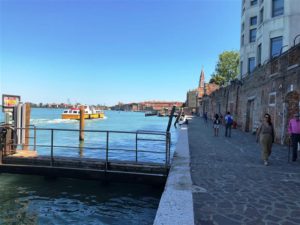 Our apartment was very close to a great eating/scenic area – perhaps three  blocks away.  We ate dinner on this plaza. 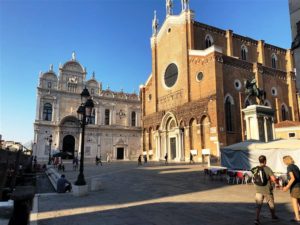 We ate dinner on the plaza with this view.

Wednesday we walked a bit over a half mile (well  sorta, we got lost a couple of times and probably increased that distance by 20-30% {grin}) to the two incredible locations shown below. 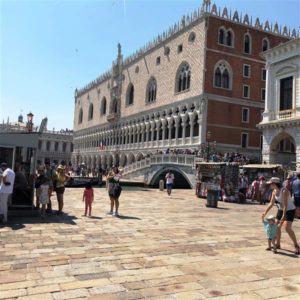 Doges Palace in Venice.  Notice bridge over the canal. 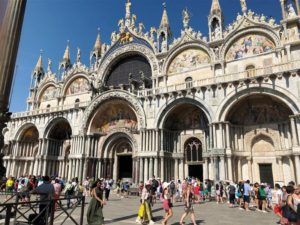 After our walking tour, we went back to the same plaza restaurant we ate at the night before.  Both nights I had some white wine rather than my typical great beer.   The wine was great as well.

Thursday was our travel day to Ljubljana.  I will detail the train travel in the next post, but our trip to the train station was quite unique.  We had our challenges on the public water taxi, mainly getting our luggage on and off the crowded boat.  We decided to take a private taxi back to the train station.  Our first challenge was that they were all full that morning.  We worked with a great shop owner to call a taxi (neither of us could speak the other’s language), but we got the job done.  I  talked to what I thought was the taxi company and they said the fare would be 18 Euro – just slightly  what we paid for the public  taxi.  Well, something broke down in the communication and the fee was 70 Euro!  However it was a great ride and dealing with the luggage was not a problem. 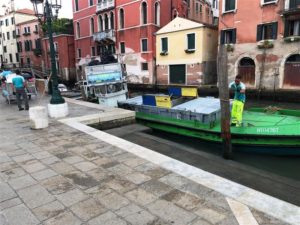 While we were waiting for the water taxi, the trash boat arrived.

It collected trash from all the businesses in the area and 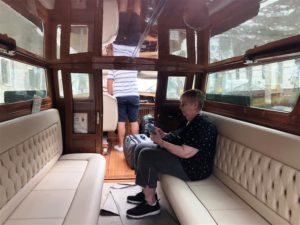 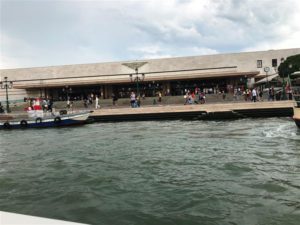 Approaching the train station in our expensive water taxi