We are in a fun little Airbnb in Venice, Italy (Google Map link)

Before we get too far into this post I would like to  catch up on a couple  of things.

The first would be the luggage situation.   As we noted before, we had a great plan where we would put one suitcase inside another and then pack our stuff in two suitcases.  The thinking behind this plan is that Stampin’ Up! always gives the demonstrators great pillow case gifts and also lots of other “handouts”.  This adds up to quite a bit of weight and volume.  So our plans were to put our travel clothes (for the rest of the trip) in two medium size suitcases and use the one large one for the SU stuff, plus some  cruise clothes we would not need.  It turns out the large suitcase was quite full and heavy.  We had planned to store that suitcase in a locker in Rome, but the “hidden cost” were quite high.  Plus the extra bag fee on American Airlines was going to be $100.  So the next option was to ship it home – again potentially quite expensive.

So, for the first part of the trip after the cruise we were dealing with three suitcases and two carry-on cases.  Our first experience dealing with all that luggage was getting on the train in Rome.  Here is a text that Pat sent the girls that describes our adventure:

“We’re going to ship a suitcase home with our cruise clothes in it. We’ve been toting 5 bags around including our two carry ons. I think we were a comedy of errors today. We made it on to our first train and while we were getting ready to get off, I set one of our carry ons in the aisle and it rolled to the back of the train car. Then we made it to Florence and the same bag fell off from the curb and landed in front of a taxi. A lady grabbed it for us; I think the taxi driver might have driven over it. I forgot to mention that as we were getting on to the first train, we were surrounded by some young ladies and one man who were trying to “help” us with our luggage. A train person saw it and made them get off the train. They were pickpockets. It’s been an interesting day, but we made it.”

The second thing I wanted to mention was how SU treats their demonstrators.  Many businesses do not recognize “the hand that feeds them”.  SU, on the other hand treats their demonstrators as an extremely valuable part of the business.  And it really shows on these incentive trips.  They pay for that air fare (working with us to assure we get the flights we want), pay all of the basic cruise costs, cover the tips for all of the employees of the ship and they even paid for our transportation from the ship to the rail station in Rome (over 140 Euro). They would have covered the cost from Rome to the ship, but we felt the bus departure time was later than we wanted.
Lastly, I  wanted to mention that we mostly travel in Europe via Eurail passes.  The pass is a bit expensive, but it lets us take any train in the huge Europe train network for 15 days (the pass type we bought – there are other options).  I don’t think we save any money over flying to each city, but the train takes us to the center of each town where other transportation (such as taxis) are readily available.  In addition, we get to travel first/business class.  We do have to pay to reserve seats, but that is about 10 Euro each.  I should add that, sadly, Uber is not a factor in Italy – and maybe other European countries.

OK, now let’s get back to our travels.  On Sunday we took the bus from the ship to a train station in Rome and then took the train to Florence.  Aside from the” issues” Pat mentioned that part of the trip went pretty well.  We stayed in a cute Airbnb (Google Map Link)

I  have attached a photo of the apartment building.   The only issue was that the apartment was on the third floor (in Europe they call that the second floor above the ground floor).  We still had the five pieces of luggage but the host helped with two of the larger ones. 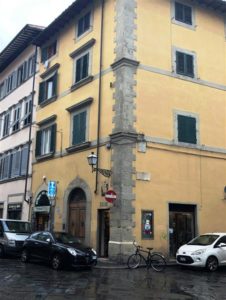 Our schedule gave us one day in the city.   In the morning I drug the large suitcase to a Mailboxes Plus which was highly recommended.  Unfortunately it was well over a mile from the apartment over cobble stone walks and roads.  To make matters worse, I did not discover that my GPS system was not working properly (cellular data not turned on) so I got lost a couple of times.  It took me almost 2 hours to get there.  The ladies were super nice and even gave me the “student” discount.  I told them I did some teaching and that made them fell well founded in discount.  They kept calling me “professor” and we all grinned.  It takes a lot of paperwork, but we got it all done and the cost was about $150 which I was glad to pay.

After I got back to the apartment, Pat and I strolled about a mile down to the Church of Santa Maria del Fiore.  We had been there before and marveled at the grandeur of the setting.  We even had dinner on the plaza.  I have included a few photos of the area. 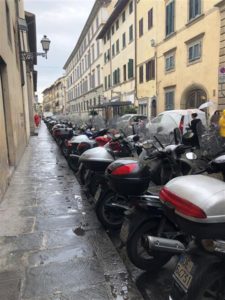 On our stroll I took this photo of the typical

line up of motor scooters 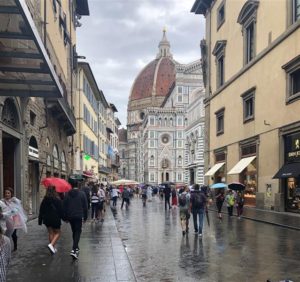 This is the street leading into the plaza

It was a slight drizzle and the temperatures

There is no way to describe the magnificence of this area.

Even the picture does not  do it justice.

This entry was posted in Uncategorized and tagged Florence Italy, Luggage, Stampin Up. Bookmark the permalink.