We are in our last port before we arrive in Seattle tomorrow for the end  of  our cruise.  It has been a great trip.

Tuesday the ship arrived in the Tracy Arm Fjord.  We sailed to the end of the Fjord and then the ship made several 360 degree rotations so that we  could see the many glaciers and waterfalls.  At times the bow and stern of the ship looked to be less than 100 yards from the rock walls.

I have included some pictures, but this is truly the case where photos do not do the scenery justice.  One of the issues was sun glare blocking one of the major glaciers. 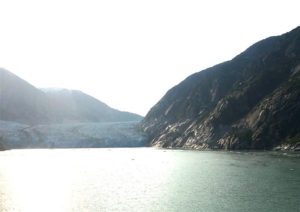 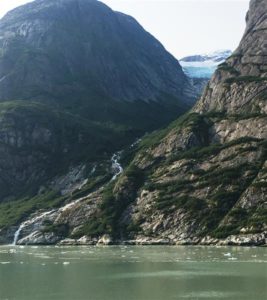 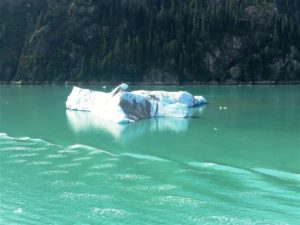 The weather has been amazing for our two excursions and the Fjord journey.   We were told that there are only around 100 clear days in Alaska and we hit three of them.   Yesterday at sea it was very foggy and you could not see all that far.  Today in Victoria, it is again clear.

We are not doing an excursion here.  We had thought about signing up for the high tea at the Empress hotel, but the tour was booked.  We had gone there for tea on our last excursion to Alaska (2004) and it was great, but we are not disappointed that we were not able to do it this year.  Indeed, we decided to stay on the ship and relax.

I believe I mentioned that Pat earned this cruise.  Stampin’ Up! is an amazing company and they treat their demonstrators very well.  While she has to work her tail off to earn the trip, once earned, EVERYTHING is paid for (air fare, cruise, gratuities for the crew members, etc) for both of us.  This is our 12th trip with SU.   Most have been cruises, but a few have been destination trips (Fiji, Thailand, and Hawaii).

This cruise line has “formal” dinner dining, where you sit at the same table with the same folks each night.  As it turns out we started out having three other couples at the table – all from Germany and all SU demonstrators!  Fortunately, they all speak English very well and we have had great conversations this past week.  Unfortunately one couple moved to a different  table,  but we have really enjoyed the remaining two couples.

When I say “formal” dining, that is a bit of a stretch.  The do have two formal nights, but it is not enforced and many men ignore the suggestion of suit and tie.  In my case, I had to – the cleaners gave me the wrong shirt and it was about 3 sizes too small {grin}.  I did wear my sport coat and a nice shirt, but no tie.

This entry was posted in Uncategorized and tagged Glacier, Tracy Arm Fjord, Victoria BC. Bookmark the permalink.