I wanted to catch up on some items from my week of teaching.  First of all, the weather was very hot.  It was over 100 degrees for at least two of the days and well in the 90s the rest of the week.  This was quite a bit higher than the average temperature for that time of the year.

During the week a large brush fire broke out a couple of miles from the hotel.  The last I read, it had consumed over 850 acres (but no structures).  It was weird leaving the motel in the dark and seeing the red glow.

Lastly, my commute was about 14 miles each way.  At the times I traveled, it was not a problem.  I had picked the Holiday Inn in Lake Elsinore without a lot of thought other than it was about the closest Holiday Inn property.  It turns out that it was not all that great of location or hotel.  Apparently there was a much better location in Temecula at about the same distance.

Now for our reason for travelling to San Diego:  The USS Midway Museum (Wiki Information).  This was among the very best museums we have ever visited.  The decommissioned USS Midway aircraft carrier has been converted into a museum.  It took us 5 hours to tour the complete ship.

The Midway was in service from 1945 to 1992.  It is 1001 feet long and is 69,000 tons total weight. It has 18 decks and 12 boilers feeding 4 steam turbine engines.  We were up and down a bunch of stairways but it was worth every minute/step/stair.  One of the best events was a lengthy talk by a former pilot about the aircraft main deck layout and the process of landing a plane on a moving target with an obscenely short “runway”.  The planes had to catch one of three cables stretched across the deck.  Surprisingly the hook that caught the cable was only about the size of your fist.

I have included two photos.  The first one was pirated from the internet and shows an aerial view of the museum.  The second photo shows the machine shop that could fabricate most any part for the ship. 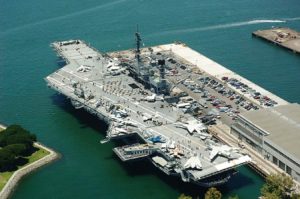 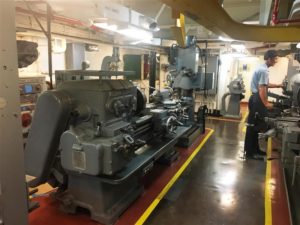 This entry was posted in Uncategorized and tagged San Diego, USS Midway Museum. Bookmark the permalink.