First of all, we made it home just fine – albeit very tired.  We left the hotel in Bangkok  Friday morning at 5:00 AM local time and arrived at our house at 3:00 AM Saturday Morning,  Denver time.  (a total of 35 hours from door to door).  Our flights took us from Bangkok to Hong Kong then to Los Angeles and finally to Denver.  With the exception of the last leg, our flights were on time.  I had upgraded our seats on the last two legs to give us a bit more legroom and that really helped us survive the long hours in the planes.

I had planned to do some work on the travelogue during this travel time, but it just did not happen.  Fortunately we were able to sleep a bit on the planes and get some reading done.

Now, I need to catch up.  This post will cover the second excursion in Chiang Mai and our activity in Bangkok.  I hope to finish the travelogue with a final post that will cover several observations about our trip.

Before I start on the second day of touring, I need to mention that our dinner the previous night was quite an event.  The restaurant was very traditional with seating on the floor.  Fortunately, we were seated at tables.  In addition to a very fancy Thai meal, there was live entertainment that presented many types of Thai dancing and music.

Our second excursion from Chiang Mai was a LONG one.  We left the hotel at 7:00 AM and arrived back just before midnight.  Our travels took us to north from Chiang Mai to Chiang Rai and then onto the Golden Triangle where Thailand, Berma, and Laos intersect.  That is roughly a 400 mile round trip.

As we travelled to Chiang Rai we drove through mostly farm land.  The primary crops were corn and rice.  The rice fields are amazing.  We stopped at one point to view several rice paddies in various stages of maturity and watched workers in the field. 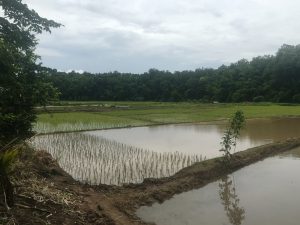 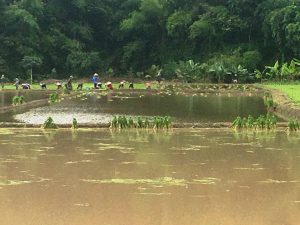 Our next stop was the Wat Rong Khun temple in Chiang Rai.  It is also known as the White Temple and it is almost beyond description.  I have attached some photos that really do not do the temple justice.  We were told that this temple has been voted the second most picturesque Buddhist temple in the world and we can believe it.  A great site with lots of photos and information can be found here (well worth the visit). 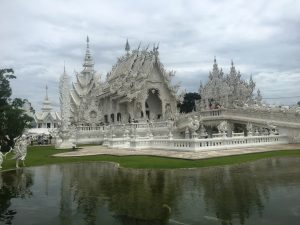 The artist who created the temple also created a meaningful way for visitors to be part of Wat Rong Khun, by way of leaf chimes. There are thousands of metal chimes, where guests can write a prayer or message. These chimes are then stacked to create beautiful prayer trees and covered walkways.  We hung a couple of chimes with thoughts about our daughters and their families. 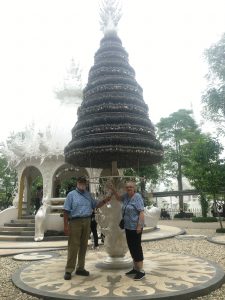 We next toured Baan Dam (black house) museum in Chiang Rai.  This is a compound created by the late master artist Thawan Duchanee.  The structures are mostly native teak wood and house some amazing artifacts including furniture made form wild animal horns. 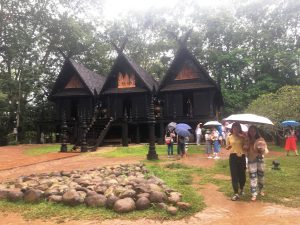 After lunch we toured the Karen Long Neck Village.  Karen is the name of the tribe rather than the name of a person.  Phil, our guide, talked with one of the women and, through translation, was able to give us some insight to their culture.  The village is really more of a “front” for selling hand made goods that the women create.  Even though the village is a bit commercial, it still has the very primitive feeling. 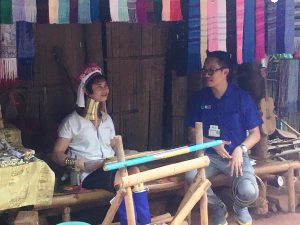 Our Guide Phil interviewing one of the longneck women 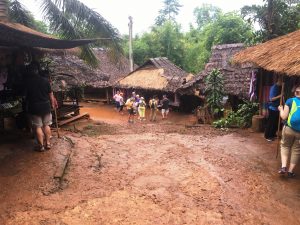 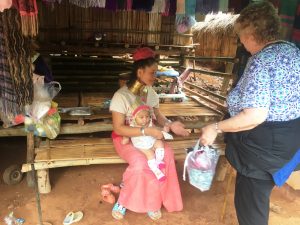 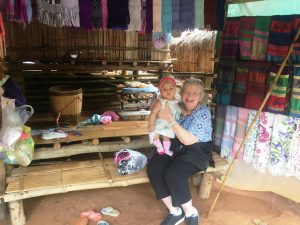 Our next stop was the “Golden Triangle” which is the intersection of the borders of Thailand, Myanmar (Berma) and Laos.  We took a boat across the Makong river and visited a very primitive shopping area in Laos.  We could not go into Myanmar because that requires a visa.  It is interesting to note that all of the discussion used Berma as the country name, rather than the correct name of Myanmar. 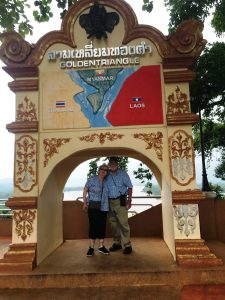 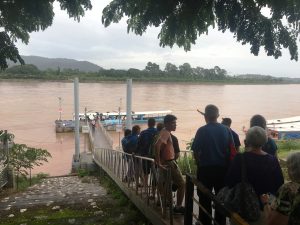 Waiting to board boat to Laos 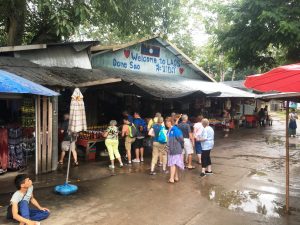 After our quick visit to Laos, we started the long journey home.  We stopped for dinner at a restaurant called “cabbages and condoms”.  It turns out that this was one of a chain of restaurants in Thailand.  Quite an interesting theme, and a fun stop.

My trip home was a bit “awkward”.    I felt like I was getting car sick and that never happens to me.  Our van got stopped because of a downed powerline across the road.  I got out of the van and as soon as I did, I got sick to my stomach.  Once we got going again, I felt OK – for a short time and then got sick again.  That was the beginning of a very long night of the worst flu-like symptoms that I have ever experienced.  The symptoms lasted into the next day,  I even got sick on the plane to Bangkok.  It turns out that several folks had the same problem.  The best we can figure out is that it was some sort of food poisoning.  As I draft this, Pat is now having some of the same symptoms.

Tuesday, we flew from Chiang Mai to Bangkok.  As noted in the last post, we stayed at the Holliday Inn Express.

I was still under the weather a bit and both of us were exhausted, so our only tourist activity was a dinner cruise on the Chao Phraya River.  It was a fun cruise with great views of the city, decent Thai buffet and a live band. 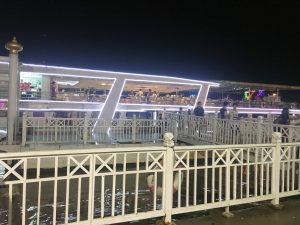 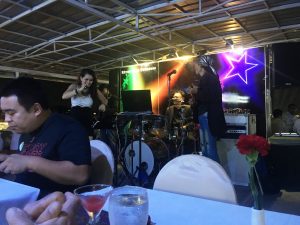