All I can say is that this is an incredible location to be doing sightseeing!!!

We decided to stay at the Park Inn for three additional days.  Our room is fine, the breakfast is good, and they extended the government room rate.  In addition, we are conveniently located close to most of the places we want to visit.

Friday we drove to Hershey, PA and had a great day.  Hershey is home base for the Hershey chocolate company and the town is tightly tied into that Company.  Milton Hershey and his wife were great philanthropists.  The following paragraph is from this Wikipedia page (link):

In 1918, Hershey transferred the majority of his assets, including control of the company, to the Milton Hershey School Trust fund, to benefit the Industrial School. The trust fund has a majority of voting shares in the Hershey Company, allowing it to keep control of the company. In 1951, the school was renamed the Milton Hershey School. The Milton Hershey School Trust also has 100% control of Hershey Entertainment and Resorts Company, which owns the Hotel Hershey and Hersheypark, among other properties. He took great pride in the growth of the school, the town, and his business. He placed the quality of his product and the well-being of his workers ahead of profits.

In 1935, Hershey established the M.S. Hershey Foundation, a private charitable foundation that provides educational and cultural opportunities for Hershey residents. The foundation supplies funding for three entities: the Hershey Museum and Hershey Gardens, the Hershey Theatre and the Hershey Community Archives.

The founding of the Penn State Milton S. Hershey Medical Center was a gift from the Milton Hershey School Trust to the people of Pennsylvania, with an initial endowment of $50 million and only one restriction—the hospital had to be built in Hershey. The hospital is a teaching hospital, with an annual budget exceeding the initial construction cost.

We toured “Chocolate World” (including a chocolate tasting experience) and then took a 70 minute tour of the town of Hershey.  The town is so tied into the Hershey chocolate products that the street lights are “Hershey kisses” (see photo). 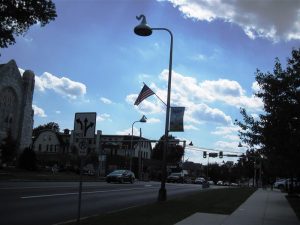 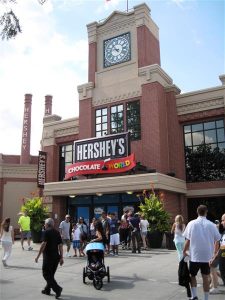 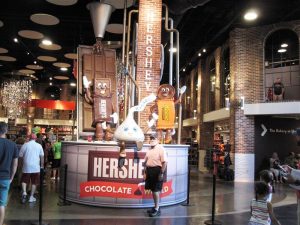 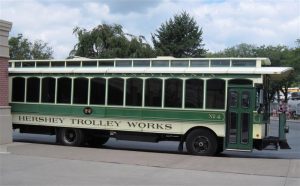 Friday night I went to the sprint car races at an historic dirt track: Williams Grove Speedway (link).  The track was built in 1939.  The night I went there was only one class of sprint cars (“358”) but there were close to 40 cars.  The students had recommended that I buy a pit pass and that was well worth the money.  I was able to do a lot of “rubbernecking” and watch the heat races from inside of turns 1and 2.  I then went to the backstretch stands for the feature races.  This area is a hot bed for sprint car races and the better local racers are said to be as good as the touring pros.  I can believe that, given the great performance I witnessed. 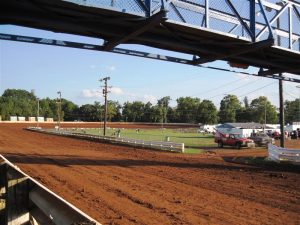 Yesterday we toured Gettysburg (link).  We last toured Gettysburg in 1980 in our VW camper bus (photo).  At that time you could borrow a cassette tape and drive to various locations on the auto tour so that you could hear the history and experience the views of the huge battlefield.  Today you can still get cassettes or CDs, but we chose to download an iPhone app that included a GPS function.   Between the park map, and the app, we were able to experience a bit of the battle.  I have included some photos from the tour. 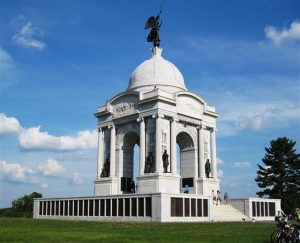 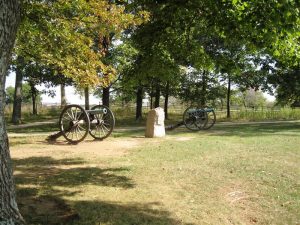 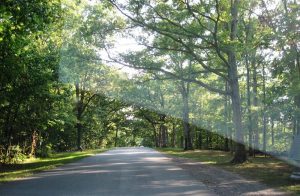 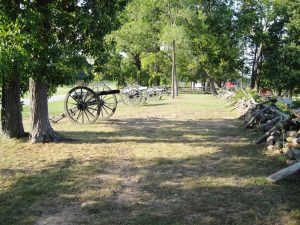 The auto tour was extraordinary.  The scenery is fantastic with rolling green grass hills punctuated with very dense forests.  We noted several signs that said that relic hunting was prohibited.

In addition to the auto tour, we toured the museum and watched a great documentary film.  Following the film, we viewed an amazing cyclorama (with program).  The cyclorama is a type of 360° cylindrical painting. The intended effect is to immerse the viewer in the scene being depicted, often with the addition of foreground models and life-sized replicas to enhance the illusion. The version that hangs in Gettysburg was created in 1883 and restored in 2005. It is 42 feet high and 377 feet in circumference.

On the way down to Gettysburg, we took a slight detour through Carlisle to get a feeling for what the Corvette show was like.  We did not go in the fairground, but it was obviously a huge event.