Over the years, I have worked with a team that has a goal of a speed of 550mph.  Their website details incredible quality of construction  and complexity of the vehicle:  site link.  They use Gates PolyChain belts to drive the two blowers and three specially designed belt drives that connect the two engines/transmissions to the drive axles.  Marlo Treit (owner) and Les Davenport (tuner/driver) offered their typical hospitality.  While they worked on a broken transmission output shaft, I was able to check one set of drive belts.  They designed drive housings that fully support the belts and avoid some issues that could have cropped up.  I feel proud to be a part of that design.  Marlo signed a picture for me (see attached) and gave me a team tea shirt. 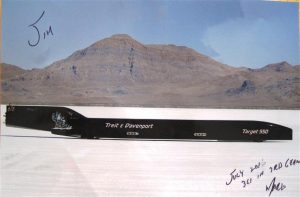 This was the first year the car has been on the salt and they are doing some shakedown runs.  That said, they ran 385 on their last run.

They had to work on the car for the first three days of the event.  As a result they made their first run on Tuesday.  We had planned to leave on Tuesday morning, but I decided to see if I could observe their run.  Fortunately they made a run in the late morning and I got to witness the run from their pit (about the 4 mile mark).  It was a real thrill to finally see the car run.

We departed our campsite around one and decided to drive as far as possible – planning a three day trip.  The bus is pretty easy/comfortable to drive, so it was no problem to make it half way home on Tuesday .  We parked in the back of a service station in Green River, UT.  Wednesday we drove the rest of the way home.

This entry was posted in Uncategorized and tagged Bonneville, Speed Week, Target 550. Bookmark the permalink.