Special Edition: Retracing the Battle of the Bulge Part 1

Special Edition:  Retracing the Battle of the Bulge Part 1

This and the next one or two posts will be rather special to Pat and I.  We are retracing the last part of the Battle of the Bulge route that Pat’s dad was involved in.  Her dad (Lloyd is still alive and doing well at 92 years of age) was in the 83rd Infantry Division link (see insigna below),

Several of the following paragraphs are quotes from various sources.  If it is a quote, I will indent the text:

The 83rd Division insignia consists of a monogrammatic design in gold spelling out the word "O-H-I-O" on a black triangular background. The insignia was selected during World War I because the division contained mostly Ohio draftees. Even though the division changed from an Ohio outfit to one representing the 48 States, the insignia still remains.

The 83rd Infantry Division received its nickname, the "Thunderbolt" division, after a division-wide contest for a new nickname held in early 1945. A new nickname was desired to represent the nationwide origins of the division's personnel during World War II.

Lloyd’s induction was 18 July 1944.  His date of separation was 11 March 1946.  In that relatively short time, he experienced a terrible war and battle conditions beyond imagination. 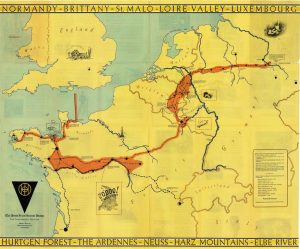 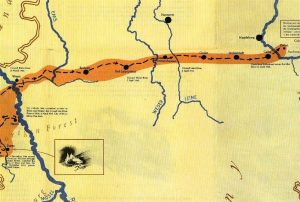 The approximate route we will trace

The maps for the part we will trace have some notes about dates at certain locations:

Editor note:  The final battles of the European Theatre of World War II as well as the German surrender to the Soviet Union and the Western Allies took place in late April and early May 1945.

As background, the 83rd landed on Omaha Beach on 23 June 1944.  Lloyd would join them later in the battle.  He went to Europe by ship sailing on 1 January 1945 and arriving 6 January 1945.  He would  join the Division in what is called the Ardennes – probably somewhere around Liege Belgium.  The conditions were terrible.  The following quote from a pamphlet titled; “The Story of the 330th Infantry Across Europe” tells a bit about the conditions they faced.

The newspapers called it the "Ardennes", the "Breakthrough", or the "Bulge". But we in the line didn't describe it with such polite terms. We called it all the foul,vile things that it really was. It wasn't fighting only an enemy flushed with sudden victory; it was fighting the weather as well. It was Valley Forge, edition of 1945. Clothing froze on bodies, weapons failed to function. Feet turned black and purplish from trench foot. Any wound was serious. If you fell, you froze. The only covering for the dead was a blanket of snow. But we kept going forward, as usual.

Our plan was to  stay in Kassel Germany and take two circular routes as shown below.  The top of the routes were the actual route taken by the 83rd.  For the first loop, we had planned to make it to  Beckham, and then follow the route heading east.  We actually started a bit east of Beckum. 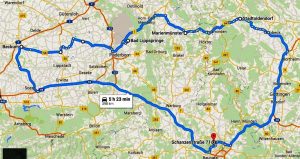 Battle of the Bulge west loop

Battle of the Bulge east loop

For some reason we did not take many pictures the first day.  I think we were trying to get used to the driving, trying to imagine what it was like to fight in both wooded areas and open fields.  Our weather conditions were great, but they had to fight in terrible winter weather conditions (recall that this route is quite far north — same latitude as Calgary Canada).  The day light hours would have been very short.

The one stop that we did make (and took pictures) was the small town of Marienmunster (see map).  We ate at a great restaurant and then drove around looking at a beautiful abbey The Abbey seems to have many names, but is most often referred to as Marienmünster Abbey, a former Benedictine monastery.  The history of the Abbey seems a bit foggy, but the best we could find is that it was built in 1128, destroyed in the 1600s during some wars and then rebuilt again in the late 1600s.  Apparently it was not damaged during WWII.  It is no longer an active abbey/monastery.  It is currently used for various local activities including concerts.  The Abbey and restaurant are out in the country with only very small towns in the surrounding area.  If you expand the map, you will see that the area is mostly agricultural. 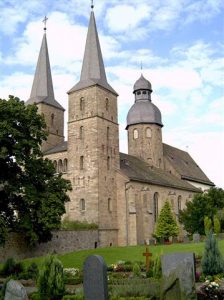 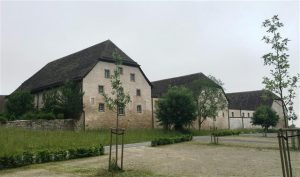 As seems to be a trend for this trip, we like to show the restaurants we eat in and photos of the food.  This was such a great stop that we could not resist adding a few more pictures: 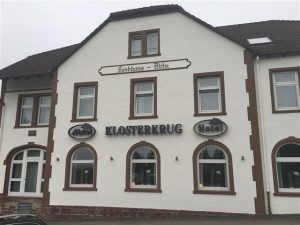 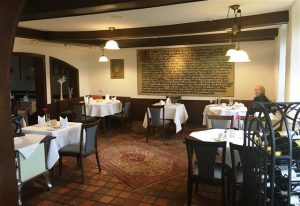 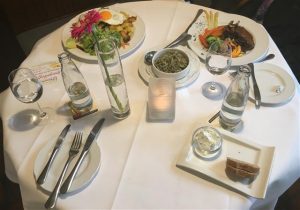 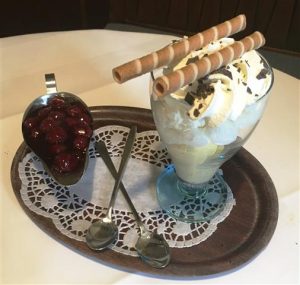 We split this amazing dessert

After our wonderful lunch stop, we continued on our western Bulge route ending in Einbeck before we headed south back to our apartment.

This entry was posted in Uncategorized and tagged Battle of the Bulge, Marienmünster Abbey. Bookmark the permalink.