[editorial note:  I had a huge problem posting pictures, but have now resolved the problem and I am sending again]

We have some new readers, so I thought I would review some details about our blog.  The goal of this blog is to detail our travels.  It started many years ago as a group email to our family and a couple of friends.  We then started a blogspot hosted blog and posted to that for a few years.  Then we migrated to a blog that is hosted on our website and uses WordPress software.  That gives us better control of the format of the blog.  For the most part, I write the blog for our benefit.  We often go back and re-live some of our trips.

There are two ways you can read about our travels:  1)  visit our blog site and/or 2) subscribe for an emailed version (see right hand column on the blog to subscribe).  The only downside of the emailed version is that you see the first version posted and not the corrected version that appears on the website.  With the website version, I use an app that inserts a Google map of our location.  That only shows as code in the email version.  I will try to remember to post a link so that those reading the email version can call up the Google map.  Yesterday I posted a map of our apartment location in Madrid.  Here is the link to the map for our email readers:  map link

Now, back to our travels.  Tuesday we did a fairly lengthy walking (hobbling) tour from our apartment to the Palacio Real de Madrid (Royal Palace of Madrid) link.  The palace is the official residence of the Spanish Royal Family at the city of Madrid, but is only used for state ceremonies. King Felipe VI and the Royal Family do not reside in the palace, choosing instead the more modest Palacio de la Zarzuela on the outskirts of Madrid.  The original Palace burned to the ground in the early 1700s and this building was constructed in the mid 1700s.

We have been in some magnificent buildings (including the Sistine Chapel) and this ranks one or two on our list.  We took the walking tour of the Palace and you go through about 20 rooms on the second floor (three story building) – each of which can’t be adequately described in words or photos.  That said, here are a few photos (interior photos are prohibited, so I used some I found on the internet): 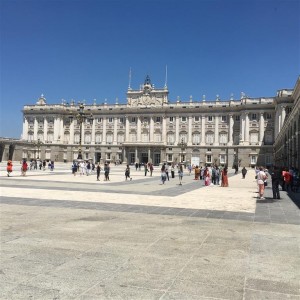 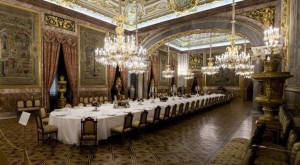 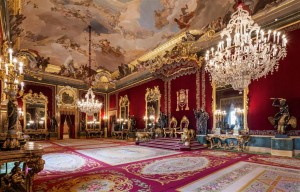 Just prior to reaching the Palace on the tour, we stopped at the Cathedral de la Almudena (link).  It is the seat of the Roman Catholic Archdiocese of Madrid.  It is adjacent to the Palace.  Here are some photos: 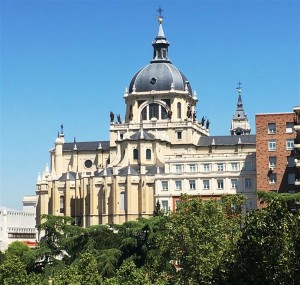 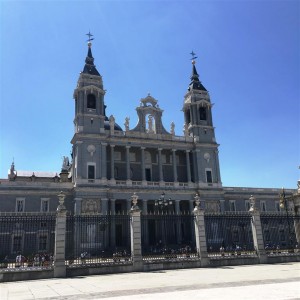 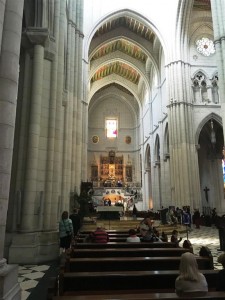 On the way to the Palace we stopped at a beautiful church that is not well documented:  Iglesia de San Andres.  From what I can tell, the church was built in the mid 1600s.  Some pictures: 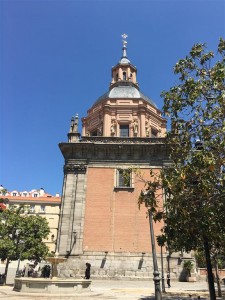 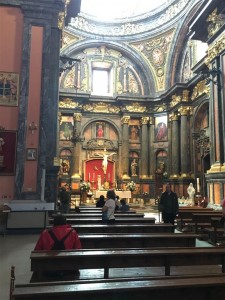 The walking trip was over 3 miles.  Almost all of the streets and walks were cobble stone.  In addition, there were a ton of stairs.  By the time we got back to the apartment we must have looked like we had been run over by that infamous Mac Truck {sort of a grin}.  Pat is due for two knee replacements and now my bad knee has flared up again.  For the most part, I have mine under control with what I call my John Elway brace (like the one he used to wear in the games), but towards the end of our walk I thought I was in trouble.  This getting old is not for the faint of heart.  Lest you feel sorry for us, we are still having a great time and have been able to see some incredible sites and experience a different culture in our first few days.

Now for some general observations.  I have been fortunate enough to travel to various parts of Europe several times – mostly on company business.  My first trip to Europe was around 1978 when I worked with a team negotiating on a technology exchange with Bulgaria.  Pat has been able to accompany me on some of those trips.  In the early days, one of the biggest challenges was trying to deal with all the different currencies.  For the most part those trips were arranged/scheduled by the company and I did not have to be responsible for trip details, plus I was always in the presence of someone who spoke English and could keep me out of trouble (mostly).

As the need for computer communication increased it was always a challenge to find an internet connection.  Many hotels did not have internet in the early days and I would have to rely on internet cafes or the company computer system.  Even the company system was a challenge as the keyboard was not the same as the US computers.

On our last trip over (2008 with Pat’s cousin and her husband), it was still a challenge to find internet connections.  So far on this trip that does not seem to be a problem.   I see lots of WiFi signs in most restaurants and our Airbnbs all claim to have WiFi.  The WiFi at this apartment is very good.  That makes researching our trip details very easy and we even scheduled a taxi for tomorrow on line without having to deal with a language barrier.

It is interesting to do Google searches here.  Most of the sites listed are in Spanish.  When you think about it, that makes sense, but it sure is a challenge to find pages in English.  However, Google has an amazing ability to translate most pages.

This entry was posted in Uncategorized and tagged Cathedral de la Almudena, Internet Service in Europe, Royal Palace of Madrid. Bookmark the permalink.