Posted on July 28, 2014 by beltguy
Hello from Natoma Kansas
Draft started Saturday morning,  July 26, 2014   (First post of this travelogue)
Completed and published Monday July 28
This has been a bit of a crazy whirlwind trip.  More about that in a minute.
I need to add a note or two about our  trip to Salt Lake.
As we noted, we diverted from a direct route back home from
Salt Lake so that we could visit our two grandsons who attend college in
Gunnison Colorado.
We drove from Salt Lake to Grand Junction and stayed the
night at a Holiday Inn Express.  Monday
we drove to Gunnison and again stayed at a Holiday Inn Express.  We were able to have lunch with Austin and
then Dinner with Thomas and Klara.  It is
so fun to see that these young men have matured so much and are doing well in
College (both will be seniors this year).
We arrived home Tuesday.
On Wednesday (7/23) I drove the bus to Natoma, Kansas to stay
at a friend’s house.  Natoma is north of
Russell and Hays on Kansas highway 18.
Since this was mostly a boy’s trip, Pat stayed home.
The reason for this trip was to attend the KKOA Leadsled
Spectacular in Salina, KS.  The KKOA
website is here.  I have been a member since the early ‘80s and
have attended this event many times.
Indeed, I completed the ’56 Chevy in ’87 and the whole family drove to
Springfield IL for that event.  Pat made
poodle skirts and sweaters for her and the girls (see photo). 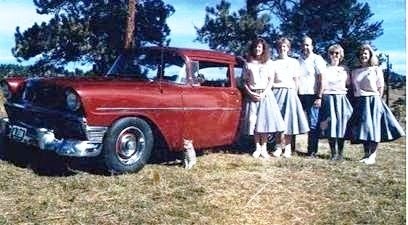 For many years they held the event in various cities in the
mid-west (including three different Springfields – IL, OH, and MO – Pat and I
attended them all in the ’56).  I have
not driven the ’56 in several years – maybe next year.  They have now settled on holding the event in
Salina, KS because it is just about in the center of the country.
The car count dwindled over the years, as have many major
car events.  However, the count has
picked up in the past couple of years and it appears that there were over 1,000
registrations this year!
The show was great!
Wish I could say the same about the weather.  It was 106 degrees in Salina on Friday when
my friend and I attended the show!!  Can
you say brutal?
I had a good time visiting with my friend John.  He has 20 acres with a fairly large
percentage filled with out building with all kinds of good stuff in them .  He also has a large number of buses and 50’s
era trucks on the property. We visited a one of his friends whose family used
to own a GM dealership in a close-by town.
The person has a huge collection of neat old cars, many of which were
very low mile trade-ins that the family kept.
I returned to Evergreen on Saturday.  The bus did fine and it was fun not to have a
toad behind me.
That is all of now.
This entry was posted in Uncategorized and tagged Leadsleds, Natoma KS. Bookmark the permalink.