Thursday we toured Bryce Canyon and then drove to Torrey, UT.  We are staying two nights at the Broken Spur Inn (map).

Bryce Canyon is another spectacular National Park.  One of the distinctions between Zion and Bryce is that you are on the floor of the canyons in Zion, while you view Bryce from the top.  Both are magnificent!

In Bryce National Park, we took the shuttle to Bryce Point and then drove the car about 18 miles out to Rainbow Point.  Everywhere you looked the views were magical and quite varied.  Without question, I could post 100s of pictures and not do any of the park’s beauty justice.  Indeed, my  rather simple camera can’t begin to capture what the eye sees.  That said, here are two pictures that attempt to show the spectacular beauty of the park: 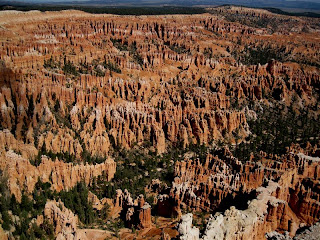 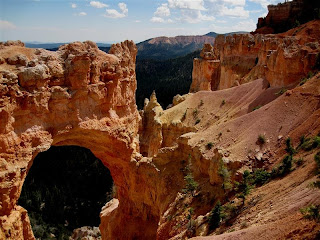 The trip from Bryce Canyon to Torrey is via Utah 12 which is designated a Scenic Byway (link).  Wikipedia describes it: “ …. also known as “Highway 12 — A Journey Through Time Scenic Byway”, is a state highway designated an All-American Road”.   Indeed, it is a magnificent 120 mile drive.  Part of the highway is designated “the hogback”.  It is a narrow road with steep drop-offs on each side.  I tried to find photos or Youtube videos that adequately describe that area, but could find none that depict that part of the drive.  The drop-offs are at least a couple of hundred feet.  It gives a new meaning to “pucker power”.  You could spend several days exploring the side routes, but we were tired and wanted to get to Torrey.

Friday we drove to Capitol Reef National park.  That is a short distance from Torrey.  The park straddles Utah 24 and has several “pull-outs” that allow you to take pictures of beautiful rock formations.  One side trip to Goosenecks Overlook” lets you look down into a steep canyon where the river has carved several bends that do indeed look like goose necks.  Part of the park is the historic site of Fruita.  A few of the buildings have been restored and one cabin is used as a small museum.

Most of the sites describing the park talk about driving the  10 mile “Scenic Drive” road.  When we got to the end, there was an open gate that let us take a dirt road into a narrow, steep canyon.  On the map is is called “Capitol Gorge”.  At times the road is the riverbed.  It would not be a good place to be if a rain storm came up.  By far, it was more picturesque than the “Scenic Drive”.  I took several picture trying to capture how small the car was in relationship to the steep canyon walls.  Unfortunately, the perspective of the car in the photos does not begin to show the height of the canyon walls.  Here are a couple of photos: 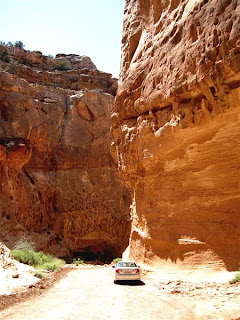 One view of Capitol Gorge Road 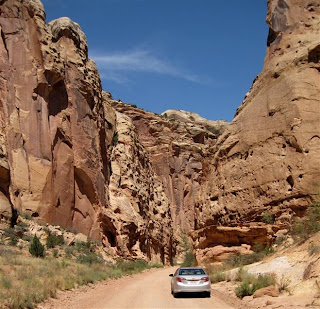 Another View Of Capitol Gorge Road
(note: car is 1/4 mile from the distant cliff —
prospective does not properly show height of cliffs)

As noted in the beginning, I am late in finishing this post.  Indeed, we are in Grand Junction at the Candlewood Suites (map).  I will try to catch up in the next post.