Posted on October 26, 2011 by beltguy
Hello from Evergreen, CO
Wednesday afternoon
October 26, 2011 (eight travelogue of this trip).
Well, as you can see from
the title, we are home. As I write this, there is about 8-10 inches
of snow on the deck and it is predicted to snow most of the day.
I wanted to comment about
the Wal Mart in Topeka. After it got dark we noticed a large neon
sign in front of the coach (all we could see from the windshield was
the end of the sign). I went out to investigate, and it was a great
looking sign marking the site of the Chief Drive-In Movie Theater
(see photo). Apparently, they built this store on the drive-in movie
sight and left the great sign. 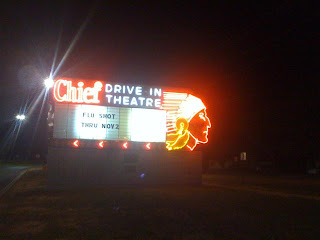 Great Looking Neon Sign in front
of the Topeka Wal Mart
Monday night we stayed in
the Wal Mart in Goodland, KS. We have stayed there before and it has
pretty good parking and ease of entry.
Yesterday we left right at
sun rise to make sure that we would beat the storm. They had
predicted it would not hit until the evening, but you just never
know. We got here at about 11:00 AM – plenty of time to unload and
park the bus in the shop. I elevated the bus with the jacks and have
it sitting of jack stands so that I can do some work underneath and
in the lower bays (more comfortable working position) over the
winter.
That is the good news.
The bad news will be detailed in a minute.
Periodically I present a
summary of our travels in the bus. The bus made it’s inaugural trip
in March of 2006. Since that time we have driven it over 65,000
miles, through 27 states and have stayed in the bus 716 nights.
This trip covered close to
3100 miles and we were on the road 41 days. The bus performed very
well. We had one minor incident in IA where the charge air cooler
hose came off. It took about 15 minute to get it secured back in
place. Other than that, we had no problems.
Now for the bad news. As
most of you know we tow a rather heavy service truck behind the bus.
About a mile from the house, the hitch broke and the truck swerved
from side to side quite a bit. It could not have happened in a worse
spot, as the truck swerved into the ditch and the right front wheel
hit a big rock and tore up the front end pretty good. I lost a tire,
a high dollar aftermarket wheel and at least two of the control arms.
Because of the snow, I can’t inspect for further damage. My guess
is that it will be several hundred dollars to repair – with me
doing the work. Long ago, I converted to very robust safety chains,
and the kept the truck from breaking away from the bus.
Funny thing was, I had
just added to my to-do list, an item for me to thoroughly check all of
the hitch components over the winter.
As a side note, I have a
bunker where I store the trash bags until I can take them to the
dump. It is pretty darn secure, as the walls are made of railroad
ties and the top is made with 2X6 boards. When I walked around back
it was fairly obvious that a bear had ripped the boards off and dug
through the trash. What a mess. There have been several reports of
bears in the area. We are careful not to have any food in the trash,
but they probably smelled the food containers containers (we even
rinse them out, but their powerful sense of smell tells them that
food is/was present. It will be interesting to see if they come
back.
That is all for this trip.
This entry was posted in Uncategorized and tagged Broken Tow Bar, Evergreen, Home. Bookmark the permalink.