We are here in Douglas to do an installation of one of my systems plus an installation of a SilverLeaf “Glass Dash”. The Glass Dash is a full dash replacement that costs $10, 000. It basically works like a modern aircraft display with very vivid digital/analog gages, several camera channels, and lots of coach information. I will be assisting and training with a SilverLeaf engineer who is flying in later this week.

During the week, we will be staying at the Holiday Inn Express (map). Obviously we do not have the bus running and will probably not have it running for at least another month.
We left Evergreen Saturday morning and arrived here about 3:00 PM We made a stop at the Cheyenne Cemetery (map) where my mother’s relatives are buried. If you zoom in on the map, the point of the arrow is at the graves of my grandparents and four of my aunts/uncles. We visited that cometary in early July with my cousin and his wife. That was quite an experience, since I had not seen my cousin since the early ’60s. It was a ton of fun catching up on old times and getting some information for Pat’s genealogy efforts. When we visited the cemetery in July, I had forgotten to bring the battery for the camera, so we wanted to take the pictures on this trip.

When we were in Cheyenne in July, we stopped by the beautiful new city library. They have a great genealogy department. We had also wanted to take a picture of my grandmother’s home, but it turned out it was torn down for the library construction and the location was almost exactly where the genealogy department was located!

Now, back to this trip. We drove the service truck (see attached picture). We had not intended for this truck to be a “touring” vehicle. Indeed, it is not the best highway vehicle. It has a very thirsty V10 engine (10 MPG). The engine makes the truck very peppy, considering the weight. It has four wheel drive and a five speed manual transmission. It is a fairly basic truck (did not want anything fancy). Because it was basic, it did not have cruise control and I have leg pain issues if I can’t move around. I did a quick install of an after-market unit and it works like a champ. Made the drive almost pain free. I really like the Dodge suspension on this truck. We have oversize tires with rather high tire pressure, yet the ride is not all that bad.

Today I started the installation. This part is not fun as it involves working under the coach running the wires and tubing for the system. In this case, it was really difficult, as we could not get the coach very high and the surface was loose dirt and lots of sharp gravel rocks. The underside of these coaches are constructed such that it is very difficult to run the conduit in which the tubing and wires are run. At least the worst part is done.

It usually takes three days to do an install and I am probably going to have to hustle to get it done in the time alloted. The SilverLeaf install is scheduled for Wednesday and Thursday. We hope to head home on Friday. 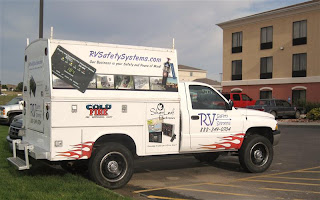 Our service truck at the Holiday Inn Express in Douglas, WY
This entry was posted in Uncategorized and tagged Cheyenne, Douglas, service truck. Bookmark the permalink.