Hello one last time from Yuma, AZ Sunday afternoon March 1, 2009 (eight travelogue of this trip) I guess we have been having too much fun to do much posting on the blog. Ed and Stevi got back from house sitting on Friday. They has been in Prescott and it was much cooler there. Indeed, the last of the snow melted the day they left to return home. We had planned to take in a couple of movies on Valentines day, but we did not get around to it. Instead we went the next day. We saw two movies and got several discounts to where the four tickets only cost $20. The first movie we saw was “He is Not Really All That in to You”. It was, at best, a so-so movie. The next one was: “New in Town” and it was absolutely a great movie. The setting was New Ulm, MN and they hit it dead on. Minnesota people are really super folks, but their accent and life style are different from what we are used to. We called the kids and told them they had to go see it. We did a bit of grocery shopping and running around the past couple of weeks. I finished up the two articles I was working on and have started a third. Actually, it is the fourth since I have a third article that is nearly finished, but we are not sure where it will be published. I did a few other business related items, some small projects on the truck and bus, a bit of reading and some relaxing. Pat also did a bit of work, but mostly read and relaxed. We walked most days. Pat had a gift credit card that was going to expire at the end of February. She had been wanting a Wii and Wii Fit. We were able to get those and she has been getting started on working out and doing baseline measurements. It looks like it will be a great way for her to work out in the bus (and home) and the games are fun. I mentioned shopping. When we go the the local grocery store (Fry’s) it is quite an experience. Pat described it as going to a store in Denver that is crowded to the max (with small isles), but the difference here is that everyone here is over 70 and are in absolutely no rush. Indeed, they read every label in great detail. A week ago Friday, some good friends drove into Yuma and we all went out to dinner. Sean and Louise have a fabulous blog about their full-time travels in a beautiful,unique Bus (http://ourodyssey.blogspot.com/). Our paths seem to cross once or twice a year and we always have a great time talking about our travels and lots of other things. Last weekend I dropped Pat off at one of the local casino and then I went to a hamfest (folks who are interested in Ham Radio technology) and then to a neat car show. The hamfest was not a good one. I have given quite a bit of thought about getting my Ham license for many years, but just can’t justify the cost or time resource required. I still like to follow the technology. The car show was rather small, but had great cars. There are a huge number of street rods, classics, and customs down here. The average age of most “snow birds” is at least 60 and many are financially set and can afford the “toys”. I mentioned that we had gone to see the flowers in the desert. I have attached two pictures of the flowers and one of Pat standing in front of an Ocotillo (sometimes called “Vine Cactus”). This is a curious, and unique desert plant of the southwestern United States. As you see, they can grow quite tall and have flowers on the tips of the spines during a small period in the spring. The purple flowers carpet the desert this time of year if the weather is conducive. Today we went shopping with Ed and Stevi and tonight we are going to splurge and go to Red Lobster for dinner. Tomorrow we start our journey home. It will be a struggle to leave these great folks, wonderful surroundings and outstanding weather. Today it is close to 90 degrees. That is all for now. 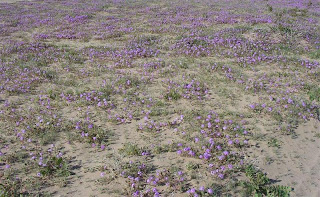 Carpet of flowers in the desert 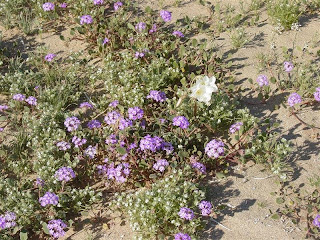 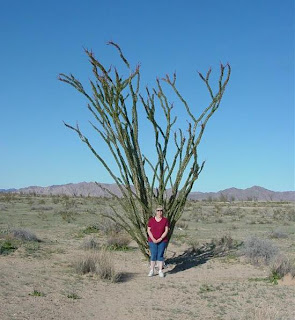 Pat in front of an Ocotillo

This entry was posted in Uncategorized and tagged Fry's, movies, Ocotillo, Yuma. Bookmark the permalink.