A word of explanation: I am posting a couple of travelogues from a trip I took to China in 2006. At that time I was writing travelogues and sending them out to an email list (mostly family and close friends) . I wanted to post this trip, as it was quite an experience. I had hoped to be able to change the posting date to reflect the 2006 date, but it does not look like that is an option. I will be posting a second China travelogue in a few minutes.

Hello from Ningbo China Sunday evening, September 3, 2006 (first travelogue of this trip) As most of you know, I have traveled to China on a consulting trip. A good friend who retired from Goodyear is also on this trip with me. Roy Semin and our wives have traveled to many countries together for ISO standards meetings. I am copying Roy’s wife ViAnne in on the travelogues for this trip. Roy and I met up in Denver and flew to San Francisco, leaving Denver a bit after 11:00. Our flight was supposed to leave SF at 2:51 PM, but because of mechanical problems they had to switch planes and we left 4 hours late. The plane was a 747-400 which is a great plane. We traveled first class from Denver to SF and business class to Shanghai (ticket cost over $10,000). This level of travel is a part of our contract with SAE (Society of Automotive Engineers). The flight from SF to Shanghai was just under 12 hours. Business class is wonderful. You can’t touch the seat in front of you and there are a huge number of adjustments on the seats to make them very comfortable. I slept quite a bit on this flight. This is unusual for me, but I had stayed up till 2:00AM getting Pat’s computer running again after a disk crash. I then got up a bit after 5:00 to get to the airport in plenty of time. Denver is 10 hours ahead of our time and Lincoln is 11 hours ahead. For example, I am writing this at 7:30 Sunday evening and it is 5:30 AM Monday in Denver. We arrived in Shanghai around 11:00 PM and a person from SAE met us at the airport and drove us to the hotel (Courtyard by Marriott). This was a great hotel. Today we drove from Shanghai to Ningbo. Ningbo is a four hour drive and is located south of Shanghai. Driving in China seems to be very “disorganized”. Lane markings are, at best, a suggestion, and changing lanes seems to be almost a sport. When you want to change lanes, you simply make the change and the person behind you honks their horn and barely makes room for you. A pedestrian is simply a target. Tonight we took a walk and I almost got run over. It really seems that the drivers speed up (even if you are in the cross walk) and honk their horn letting you know that you are about to die. We are staying at another great hotel in Ningbo (Ningbo Grand Pacific). It is an older hotel, but very well decorated and probably the nicest hotel in the region. We met for about an hour tonight with the Chief Engineer of the rubber company we are contracted to help resolve some manufacturing and testing problems. While we were assured that the translators would be capable of technical translation, it appears that communication will be a real challenge. China is just slightly smaller than the US, as measured in square miles (3.717 million for the US and 3.705 for China). However, the population is over 4 times that of the US (1.306 billion vs. 296 million). Our translators estimated that there are 30 cars for each 1000 people). Shanghai is directly west of Japan, perhaps 5-600 miles and south west of Korea by about the same distance. It is directly south of Russia (with Mongolia sandwiched in between). Grandson Josh asked how close I was to the Great Wall. It is about 800 miles north of Shanghai, close to Beijing (which is the capitol of China). A good website for maps and information is: http://worldatlas.com/webimage/countrys/asia/cn.htm The internet over here is rather restricted. My home page is on Earthlink and contains various stock market and news items. Only part of the page will load (no financial or news). Many of my favorite sites will not load. My connection is via a “CAT5” cable which should be very high speed. However, the speed is about that of a dial-up connection. I guess that is about all my jet lag brain will permit me to write tonight. 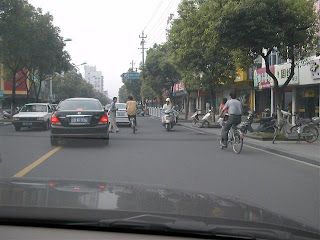 China traffic. Note the fact that cars and scooters don't pay any attention to direction of traffic 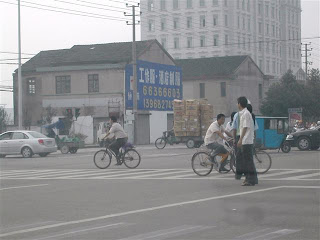 More China traffic. Take a look at the modified motorcycle carrying a huge stack of boxes

This entry was posted in Uncategorized and tagged China, Ningbo, SAE, Shanghai. Bookmark the permalink.